Technion - Israel Institute of Technology > Archive > You Are What You Exhale

You Are What You Exhale: Different Diseases Have Distinct Chemical Signatures

HAIFA, ISRAEL (December 22, 2016) – An international team of 56 researchers in five countries has confirmed a hypothesis first proposed by the ancient Greeks – that different diseases are characterized by different “chemical signatures” identifiable in breath samples. The findings by the team led by Professor Hossam Haick of the Technion-Israel Institute of Technology Department of Chemical Engineering and Russell Berrie Nanotechnology Institute at the Technion were published today in ACS Nano. 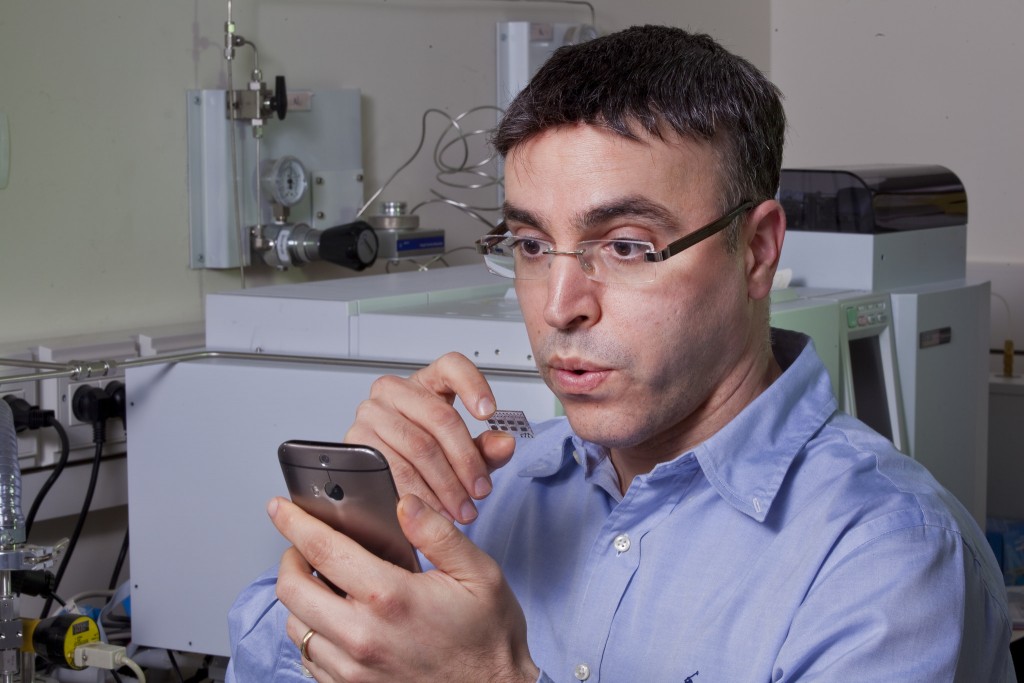 Diagnostic techniques based on breath samples have been demonstrated in the past, but until now, there has not been scientific proof of the hypothesis that different and unrelated diseases are characterized by distinct chemical breath signatures. And technologies developed to date for this type of diagnosis have been limited to detecting a small number of clinical disorders, without differentiation between unrelated diseases. 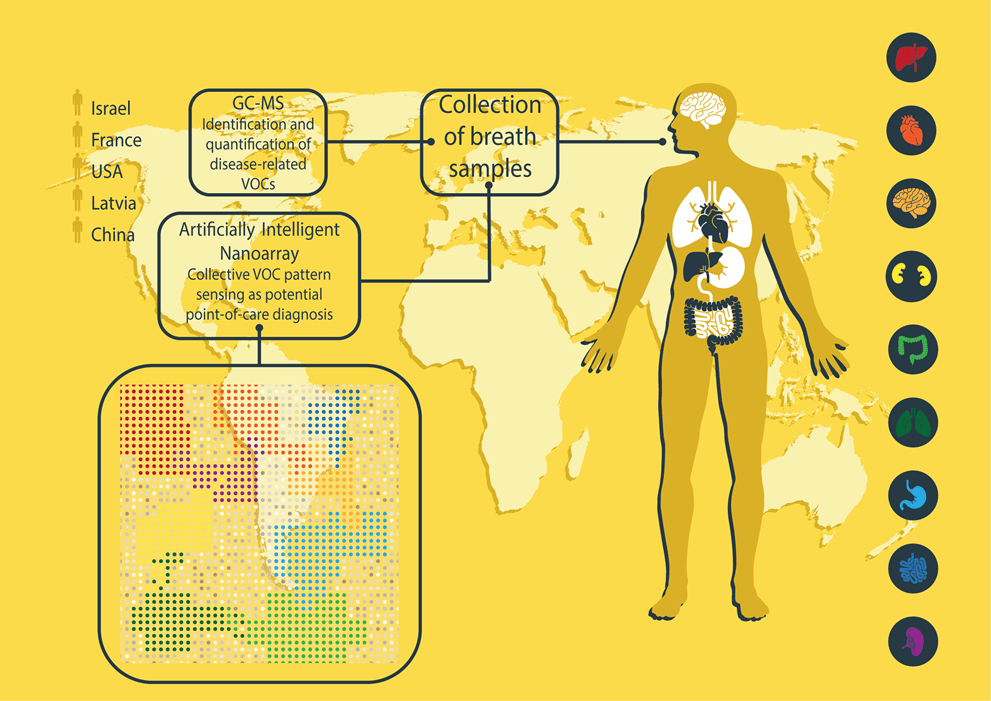 Diagram: A schematic view of the study. Two breath samples were taken from each subject, one was sent for chemical mapping using mass spectrometry, and the other was analyzed in the new system, which produced a clinical diagnosis based on the chemical fingerprint of the breath sample.

According to Prof. Haick, “each of these diseases is characterized by a unique fingerprint, meaning a different composition of these 13 chemical components.  Just as each of us has a unique fingerprint that distinguishes us from others, each disease has a chemical signature that distinguishes it from other diseases and from a normal state of health. These odor signatures are what enables us to identify the diseases using the technology that we developed.”

With a new technology called “artificially intelligent nanoarray,” developed by Prof. Haick, the researchers were able to corroborate the clinical efficacy of the diagnostic technology. The array enables fast and inexpensive diagnosis and classification of diseases, based on “smelling” the patient’s breath, and using artificial intelligence to analyze the data obtained from the sensors. Some of the sensors are based on layers of gold nanoscale particles and others contain a random network of carbon nanotubes coated with an organic layer for sensing and identification purposes.

The study also assessed the efficiency of the artificially intelligent nanoarray in detecting and classifying various diseases using breath signatures. To verify the reliability of the system, the team also examined the effect of various factors (such as gender, age, smoking habits and geographic location) on the sample composition, and found their effect to be negligible, and without impairment on the array’s sensitivity.

“Each of the sensors responds to a wide range of exhalation components,” explain Prof. Haick and his previous Ph.D student, Dr. Morad Nakhleh, “and integration of the information provides detailed data about the unique breath signatures characteristic of the various diseases. Our system has detected and classified various diseases with an average accuracy of 86%.

This is a new and promising direction for diagnosis and classification of diseases, which is characterized not only by considerable accuracy but also by low cost, low electricity consumption, miniaturization, comfort and the possibility of repeating the test easily.”

“Breath is an excellent raw material for diagnosis,” said Prof. Haick. “It is available without the need for invasive and unpleasant procedures, it’s not dangerous, and you can sample it again and again if necessary.”

Prof. Haick, full professor at Technion and head of three major European consortia, has received numerous prestigious awards and grants, including the Marie Curie Excellence Award, the European Research Council grant, grants from the Bill & Melinda Gates Foundation, the Hershel Rich Technion Innovation Award and the Humboldt Senior Research Award (Germany). He has been included in several important lists, including the list of the world’s 35 leading young scientists published by MIT’s Technology Review, the Nominet Trust 100 list (London), which includes the world’s 100 most influential inventors and digital developments, and the Los Angeles-based GOOD Magazine’s list of the 100 most influential people in the world. Prof. Haick also received the highest teaching award granted by the Technion – the Yanai Prize for Academic Excellence.

Link to the article in ACS Nano