A Technion study reveals a mechanism for accurate and individualized control of brain activity using ultrasonic waves: ultrasound’s waveform pattern dramatically affects interaction with neurons, and consequently, certain ultrasound patterns will have a different effect on different types of neurons.

Achieving artificial brain stimulation by accurate and non-invasive means is one of the key goals of contemporary brain research and treatment and a source of growing enthusiasm by the scientific community. A major success in this area is the excitation of neurons using ultrasound waves or ‘ultrasonic neuromodulation’. This approach may complement or even partially replace existing brain treatments, which require surgical insertion of electrodes through the skull and are therefore inherently more risky. The ability to affect nerve cells using ultrasound waves has been known for many years but has recently seen dramatic developments, including a demonstration of the ability to create artificial (phantom) sensations in human subjects by direct brain stimulation. However, since these are highly complex systems and phenomena, much is still unknown about them, particularly with regard to the mechanisms that enable activation and suppression of neural networks. 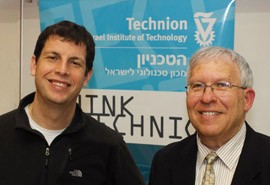 Exciting news in this area comes now from the Technion’s Faculty of Biomedical Engineering and the Russell Berrie Nanotechnology Institute, where new research conducted by Profs. Shy Shoham and Eitan Kimmel and PhD student Misha Plaksin could radically improve our understanding and ability to apply ultrasonic neuromodulation.  In a study just published in the journal eNeuro, the Technion team puts forward a unifying new theoretical foundation that explains a wide range of experimental findings in the field. Their study surprisingly concludes that the ultrasound’s waveform pattern dramatically affects its interaction with neurons, and consequently certain ultrasound patterns will have a different effect on different types of neurons. The framework they introduce also makes it possible to predict the outcome of complex interactions in realistic brain neural networks which are composed of various types of neurons.

The study is based on NICE – a bio-physical model that the research group developed to explain the effect of ultrasound waves on brain cells. According to NICE, when the ultrasonic waves interact with a cell, the cellular membrane experiences nano-scale vibrations which lead to electrical charge accumulation on the membrane:  the longer the vibrations continue, the more charge builds up in the membrane. Eventually, enough charge builds up so that an action potential is generated. The group now shows that when the ultrasonic wave is activated in short pulses, this will cause selective excitation of inhibitory cells, with the net result of suppression of the neural network activity. This is the first explanation for this suppression phenomenon, which was recently observed experimentally by researchers at Harvard University.

According to Prof. Shoham, “So far, we found a very nice agreement between the predictions of the NICE model and the results of experiments in the field. We have two important findings: further confirmation of the predictive power of the leading theory in the field, and a new ability to engineer ultrasound patterns that will specifically activate neuron populations – something that until now has only been possible using highly invasive means.”

The new study may lead to major breakthroughs in the field of non-invasive medical treatment of neurological diseases. “Right now, the brain is still something of a closed box,” says Prof. Shoham. “Ultrasound could help to pry open that box. Now, for example, for the first time at the Technion and in cooperation with InSightec Ltd. and Prof. Itamar Kahn of the Rappaport Faculty of Medicine, we are using functional MRI technology to examine the effect of ultrasound on brain activity, so that we can both excite and monitor it without recourse to electrodes and other invasive means.”


Link to the article

Link to a review of the field