Students prepared at the Technion. 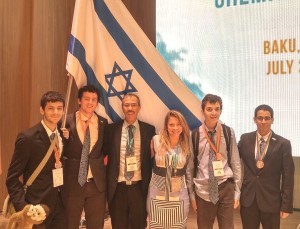 The International Chemistry Olympiad is the oldest international science competition for high-school students, now in its forty-seventh year. Three-hundred students from 75 countries competed in this year’s competition, which was held in the city of Baku, the capital and largest city of Azerbaijan. The academic challenge included a theoretical test and laboratory experiment, during which students were asked to synthesize material, conduct kinetic follow-up after a chemical reaction and identify unknown substances based on chemical reactions. The Israeli delegation was accompanied by Prof. Zeev Gross from the Schulich Faculty of Chemistry at the Technion, who is in charge of all youth outreach activities in Chemistry, Dr. Izana Nigel-Etinger, who serves as the head coach, and PhD student Jenya Vestfrid, who gained experience by training the 2014 delegation. During their studies leading up to the competition, members of the team were also assisted by faculty members, doctoral students and laboratory engineers from the Schulich Faculty of Chemistry at the Technion, and Mrs. Mira Katz who was responsible for all the administrative tasks. 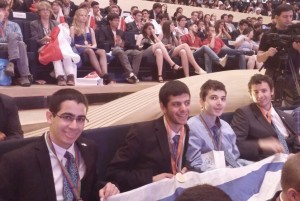 “The material they were tested on was at a very high level, much higher than what is being taught in Israeli high schools,” remarked Prof. Gross. “The four members of the Israeli team are the most outstanding of the thousands of students that participated in the screening process. To bring them to the desired level, they underwent very intensive training and study. We are extremely proud of the team’s accomplishments and are so pleased that three of its members attained bronze medals – Itai, Nadav and Ron.”

“This was a very special experience for me,” said Nadav Genossar on his way back to Israel. “We met students from all over the world. We studied and trained a lot for this competition, to reach the high level of knowledge required.  I participated in the IChO competition last year as well, and this year I won a bronze medal!”