Texas and Israel’s Technion team up to build water system

California could learn a thing or two about innovative water technologies from university researchers in Israel and Texas, whose joint desalination project won the Honorable Mention award in a USAID competition. A prize of $125,000 grant will be used in the near future to build a groundwater treatment plant in Jordan. 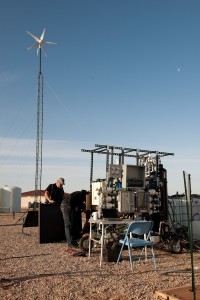 The desalination system built for the competition, which includes a wind turbine and solar panel

Driven perhaps by a common pioneering spirit or the aridness of their land, researchers at the Technion-Israel Institute of Technology in Haifa, Israel and the University of North Texas teamed up to enter the competition held by USAID— the United States Agency for International Development. The competition’s goal was to develop innovative technology for producing food and potable water in the Third World, using sustainable alternative energy. “By 2050, global water demand is expected to increase by 55%, and 70% of global water use occurs in food production,” said Christian Holmes, USAID Global Water Coordinator.

Researchers at the Technion’s Stephen and Nancy Grand Water Research Institute joined the competition at the request of researchers from the electrical engineering department at the University of North Texas. The American researchers, who focused on developing a solution to the alternative energy aspect of the competition, asked Prof. Carlos Dosoretz and Prof. Ori Lahav, researchers from the Technion Faculty of Civil and Environmental Engineering, to design a solution for the desalination aspect, and to submit a joint proposal. Other researchers from universities in Jordan, Nepal and Brazil also participated in this project.

“Hundreds of proposals from around the world were submitted in this competition,” explains Prof. Ori Lahav, who heads the Stephen and Nancy Grand Water Research Institute, where the desalination system was designed. “At the end of 2014 our proposal advanced to the semi-final stage, along with the proposals of seven other groups.” Six groups participated in the final round, which was held last month in the deserts of New Mexico. The participating teams were given two days to set up a complete, fully operational pilot system, and operate it autonomously for 48 hours to demonstrate its effectiveness in the field. 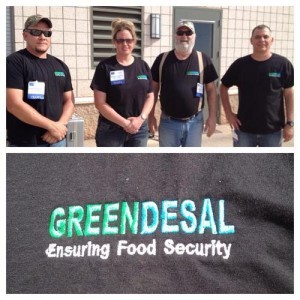 Members of the Green Desal group (right to left): Prof. Ori Lahav of the Technion, Prof. Miguel Acevedo and students Brianna and Paul from the University of North Texas

“The water treatment process was based on an innovative combination of three technologies – reverse osmosis, ion exchange and nano- filtration,” explains Prof. Lahav. “The challenge was to find a solution for problematic water characterized by particularly high concentrations of dissolved calcium and sulfate.” University of North Texas researchers used a combination of wind and solar energy to power the system.

The group in which the Technion participated included the engineer Ran Nahir and Dr. Liat Birnhack, of the Faculty of Civil and Environmental Engineering. The group was placed among the top three winners, making it eligible for $125,000 in financing for the implementation of innovative technologies in the Third World. Massachusetts Institute of Technology (MIT), jointly with Jain Irrigation Systems, won first place.

USAID is a division of the U.S. State Department with financial aid from Sida, the Swedish International Development Cooperation Agency and The Ministry of Foreign Affairs of the Kingdom of the Netherlands.