A $1.6-million gift to the University of Waterloo and Technion-Israel Institute of Technology by The Gerald Schwartz & Heather Reisman Foundation is enabling world-changing research in a range of disciplines, including research into lung disease and quantum computing. 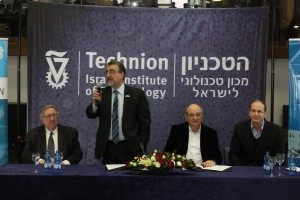 “This gift shows what a partnership between two of the world’s top innovation universities supported by the vision of Gerald Schwartz and Heather Reisman can accomplish,” said Feridun Hamdullahpur, president and vice-chancellor of the University of Waterloo. “This visionary donation is already allowing us to accelerate progress in the key areas of quantum information science, nanotechnology and water. Collaboration between Waterloo and Technion will lead to new innovations that will help to shape the future of communities, industries and everyday life.”

”The collaboration between the University of Waterloo and the Technion focuses on joint research between Israeli and Canadian scientists in areas crucial to making our world a better place”, said Technion President Prof. Peretz Lavie. “I cannot think of a better partner for such projects than the University of Waterloo, and it is the vision and generosity of Gerald Schwartz and Heather Reisman that are making this promising partnership a reality”.

Among the researchers the gift supports, Professor Frank Gu will expand his work into targeted drug delivery for eye diseases to include pulmonary diseases.

Targeted drug delivery uses nanotechnology to carry medicine directly to the diseased area improving the effectiveness of the treatment and minimizing side effects by reducing toxicity in other parts of the body.

With highly efficient and effective drugs currently available for many diseases and conditions, researchers are advancing the management of disease by improving delivery of the drug rather than developing new treatments. 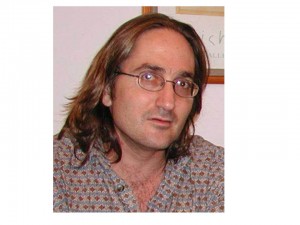 Prof. Tal Mor from the Computer Science Department at the Technion.

“There are many organs that we can live without but we can’t survive without a lung. The lung is such a critical component to quality of life,” said Prof. Gu, from the Faculty of Engineering at Waterloo and Canada Research Chair in Nanotechnology Engineering. “The problem with these drugs is they aren’t getting to the right target. Our goal is to make these particles so small and so smart, and efficiently transport these therapeutic compounds to the right place.”

The research is a joint project between Waterloo’s Gu from the Waterloo Institute for Nanotechnology and Prof. Josué Sznitman, from the Faculty of Biomedical Engineering and the Russell Berrie Nanotechnology Institute at the Technion, an expert in targeted drug delivery systems in the nasal area.

Prof. Sznitman: Premature newborn infants are frequently born with a deficiency of pulmonary surfactant, the soapy liquid that lines our lungs and is essential for easing every breath we take. Surfactant Replacement Therapy (SRT) is used to treat premature infants where artificial surfactant is instilled in the intubated neonate. Often, however, the liquid has to be administered more than once and such interventions remain a distressing experience for a newborn. Our work is aimed at improving strategies for SRT delivery where clinicians need to know how much of the initial dose will reach the targeted airways. 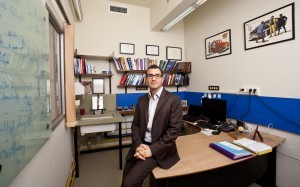 Prof. Josué Sznitman, from the Faculty of Biomedical Engineering and the Russell Berrie Nanotechnology Institute at the Technion.

Given the success of drug delivery research, being able to focus on conditions of the lung is considered an opportunity to revolutionize treatment for conditions that are highly prevalent and affect large numbers of people.

Gu’s project is funded by a grant awarded through the Waterloo-Technion Research Cooperation Program. The program was created to facilitate joint research projects between Israeli and Canadian scientists in the areas of quantum information science, nanotechnology, and water. Funding for the cooperation program is part of an overall $1.9 million donation from The Gerald Schwartz & Heather Reisman Foundation.

One of the challenges of building a quantum computer is controlling the quantum systems to behave the way we want because they are extremely sensitive to any disturbance. 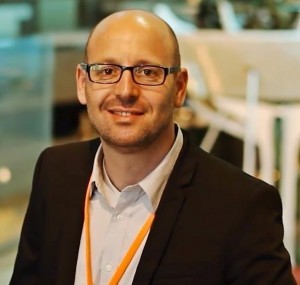 Prof. Itamar Kahn from the The Ruth and Bruce Rappaport Faculty of Medicine at the Technion.

“Along with our colleagues in Technion’s Qubit Group, we will explore theoretical and experimental algorithms to cool quantum systems and thus reduce noise,” said Raymond Laflamme, Executive Director of the Institute for Quantum Computing (IQC) at Waterloo. “Quantum computation allows the most precise and efficient processing allowed by nature.”

“It is great to have this opportunity to advance much further this field of research, and especially – together with this excellent team from IQC”, said Tal Mor, the coordinator of the Technion’s Qubit Group (TQG). “The main goal for establishing TQG was precisely for such purposes of advancing collaboration with world leaders in the field of quantum computing and information sciences, and the main goal of this current research is to advance algorithmic cooling much further together with TQG’s and IQC’s experts in (nuclear and electron) magnetic resonance and magnetic imaging.”

The Waterloo-Technion Research Cooperation Program was established in March 2014 beginning with a joint conference funded by The Gerald Schwartz & Heather Reisman Foundation and held at Technion’s main campus in Haifa, Israel. Gu and Laflamme’s work are two of 10 new projects between the two universities funded by the $1.6 million gift, shared between the two universities. Other projects range from the removal of organic pollutants in drinking water to an interdisciplinary research project at the interface of soil science, groundwater hydrology, biogeochemistry and geophysics.