Nanomedicine:  Can cancer tumors control the release of therapeutics?

Silicon carriers for the local delivery of anticancer drugs degrade differently when they reach the diseased environment, which can effect clinical outcomes. A joint study conducted at Technion, MIT and Harvard is shedding light on this degradation process, opening the way for improved tumor treatments. 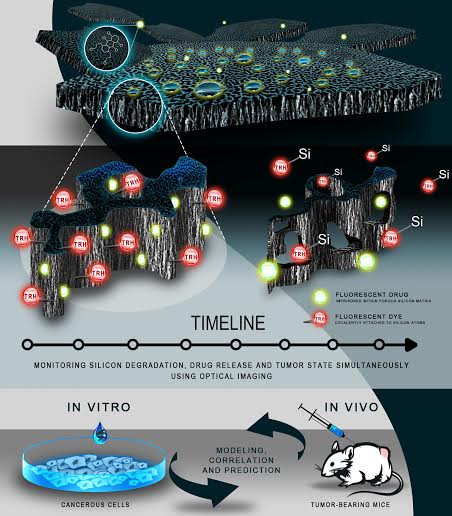 The image illustrates porous silicon (PSi) particles used as a platform for the delivery of anticancer drugs (highlighted in green on the diagram) and its release at the targeted breast cancer tumors. The degradation of the PSi at the tumor microenvironment was investigated using novel imaging methods. The researchers tracked the decomposition of the material on the diseased tissue and uncovered its degradation mechanism, which triggers the release of the drugs trapped within the porous medium

The prestigious journal Nature Communications reveals that silicon nanomaterials for the localized delivery of chemotherapeutics behave differently in malignant tumors in comparison to healthy tissues. The joint study was conducted at the Technion, Massachusetts Institute of Technology (MIT) and the Harvard Medical School.

“We have shown for the first time that biomaterials in general, and nanostructured porous silicon in particular, behave differently when they are injected (or implanted) at the tumor microenvironment.” says Prof. Ester Segal, who heads the Technion team that led the study. “Over the last few years, we successfully engineered silicon to be used as a carrier of anticancer drugs that releases its contents in a controlled manner, and now we are focusing on the degradation mechanism of the silicon at the diseased tissue.”

Nanostructured Porous Silicon is the common name for a family of silicon-based materials containing nano-scale holes. This material is today seen as a promising drug delivery vehicle, mainly due to its unique characteristics: a large surface area (geared for drug unloading), biocompatbility, and bio-degradability in a safe and non-toxic manner. In recent years, Prof. Segal and her doctoral student Adi Tzur-Balter developed ‘containers’ (carriers) for the delivery of anticancer drugs. Through careful design of the silicon containers, in terms of their pore diameter and surface chemistry, the group achieved optimal features for effective drug delivery.

The important findings of the study, which investigates the behaviour of the silicon ‘containers in breast cancer tumors, are associated with the accelerated degradation of the silicon material in the diseased area. The research showed that reactive oxygen scecies upregulated in the cancerous environment (in vivo), induce oxidation of the silicon, causing a rapid degradation of the ‘containers’ as compared with (in vitro) lab experiments. As a result, this article sheds light on the process of nanostructured silicon degradation at the tumor microenvironment, and allows for early and smart design intervention of the silicon structure to facilitate controlled release of the drug at the targeted site. Importantly, the ability to determine and predict material fate in vivo under specific environments is the next step in biomaterial design that could lead to fast and successful clinical translation. 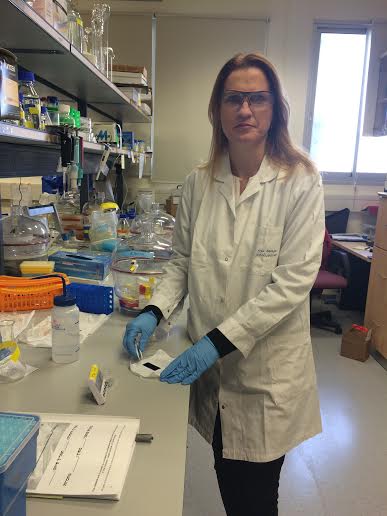 Prof. Segal completed all three of her degrees at the Technion’s Faculty of Chemical Engineering. In 2007, upon completion of her postdoctorate at the Faculty of Chemistry and Biochemistry at the University of California, San Diego (UCSD), she joined the Faculty of Biotechnology and Food Engineering at the Technion. She currently heads the Multifunctional Nanomaterials Laboratory. In 2014, she won both the Henri Taub Prize for Excellence in Academic Research and the Yanai Prize for Excellence in Academic Education.

The research is being carried out in collaboration with the Russell Berrie Nanotechnology Institute.