In the future, it will enable the development of a drug delivery system capable of penetrating the cell with the aid of a relatively low magnetic field

German and Technion scientists managed to successfully develop the world’s smallest propeller driven by an external rotating magnetic field. This is what has been reported by the scientific journal “ACS Nano.” The scientists hope that this technology will allow development of a drug delivery system directed at cells with penetration capability with the aid of a relatively low magnetic field in the future.

“Tissue and biological fluids are complex viscoelastic media, with a nanoporous macromolecular structure. We show that nano-sized screw propellers can be accurately navigated in biomimetic gel (i.e.  a synthetic imitation of biological gel),” explains Associate Professor Alex Leshansky from the Faculty of Chemical Engineering. Professor Leshansky co-authored the article with Dr. Morozov and the group of Professor Peer Fisher from the Max Planck Institute for Intelligent Systems in Germany. “The diameter of these nano-screws (that is, propellers similar to bacterial flagellum that are driven by rotation, like a corkscrew) is about 70 nanometers and they are smaller than previously reported nano-propellers as well as any motile microorganism. We have demonstrated that although the nano-propellers are too tiny to be controllably steered in liquids such as water due to random Brownian motion, they are able to move in viscous fluids (such as glycerin) with velocities similar to micro-propellers (that is, propellers the size of micro-meters).  However, nano-propellers that are driven through a gel have a significant advantage: their dimensions are of the same size range as the gel’s mesh size. As a result, within the gel, the nano-propellers actually display significantly enhanced propulsion velocities, exceeding the highest speeds measured in glycerin as compared with micro-propellers, which show very low or negligible propulsion. The nano-screws have a significant potential for applications in extracellular environments, and furthermore, they are sufficiently small to be taken up by cells”

Picture 1: SEM image (taken by a scanning electron microscope) of a nano-propeller (on the left); a schematic drawing of a nano-propeller moving in gel and its track (on the right). The polymeric mesh structures hinders the larger helices from translating effectively, whereas smaller propellers with a diameter close to the mesh size can pass through the network without being affected by the macroscopic viscoelasticity caused by the entangled polymer chains. 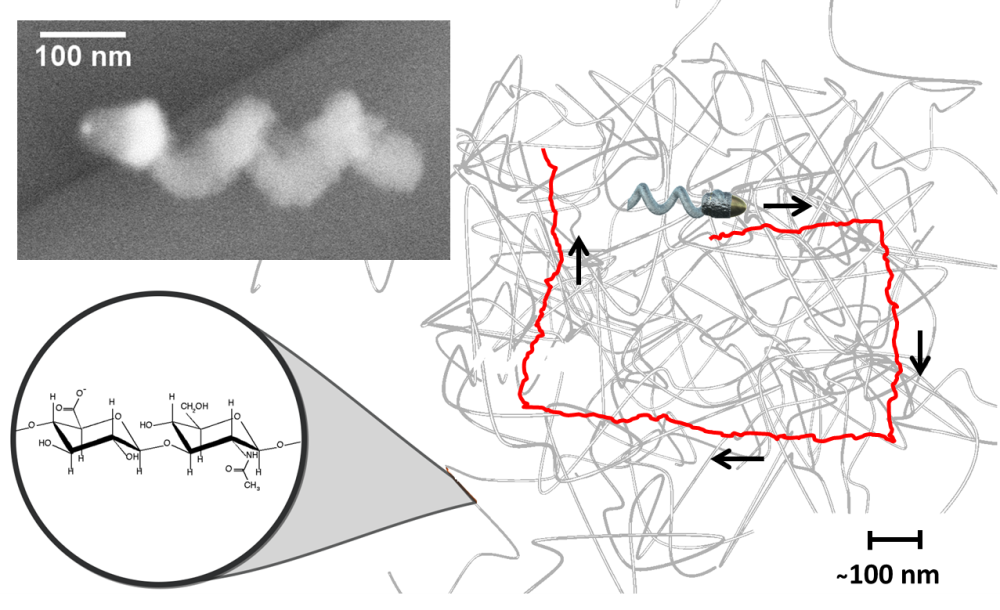