“Albert Einstein brought to the Technion an educational culture whose motto is to learn from yesterday, live for today and hope for tomorrow.”

A new era of research and innovation in science, engineering, and life sciences is opening in China with a joint venture between Israel’s prestigious Technion Israel Institute of Technology and Shantou University (STU) to build a new academic facility in Guangdong Province.

The Technion Guangdong Institute of Technology (TGIT) – sponsored by the Li Ka Shing Foundation (LKSF) with a US$130 million grant – will represent unprecedented cooperation between the People’s Government of Guangdong Province and Shantou Municipal Government, Technion, and STU.  Guangdong Province and Shantou Municipal Government will set aside RMB 900 million (approximately US$147 million) to fund construction and initial operations, as well as 330,000 square metres for the campus to be located next to STU.

The US$130 million grant from LKSF is the largest ever to the Technion and one of the most generous in the history of Israeli higher education. It will be allocated for strengthening the Technion’s home campus in Haifa, for the benefit of its students and researchers, to enable the Technion to fulfil its leading role in TGIT.

Mr Li Ka-shing, Chairman of the LKSF, spoke at today’s ceremony in Tel Aviv to formalise the memorandum of understanding for the establishment of TGIT. The agreement was signed by Technion President Professor Peretz Lavie and STU Provost Professor Gu Peihua, and will soon be brought for the approval of the Technion’s and Chinese statutory authorities.

TGIT will begin offering undergraduate programmes in civil and environmental engineering and computer sciences in the 2014 academic year.  The establishment of an innovation centre, connecting industries in Guangdong with Israel’s technological creativity, will bridge Israeli technology into China and promote joint research and innovation.  The language of instruction at the TGIT will be in English and its faculty will be recruited from international researchers and scientists in universities around the world.

Beginning in 2014, TGIT will join STU to conduct life sciences research based on Big Data to tackle the pressing social and livelihood issues like inadequate healthcare system and services, as well as improvements of clinical diagnosis procedures.

By 2020, the institute will offer courses in other engineering-related fields, from mechanical to aerospace engineering.

The partnership between Israel and LKSF began in 2011, with a visit from LKSF executives to Technion and a reciprocal visit of the Technion President Prof Lavie to the LKSF headquarters in Hong Kong.  That visit to Israel also resulted in an investment from Mr Li’s private venture capital company Horizons in Waze – a revolutionary GPS navigation technology. The profits from the recent sale of Waze to Google became part of the donation to Technion.“In a world of fluid boundaries, the transformative power of technology waves like a magic wand, bringing new models and opportunities to many frontiers and generating new solutions to entrenched problems,” said Mr Li during today’s signing ceremony.  “But we all know the wands are only as powerful as the wizards who use them, and the magic comes from the genius within.  Our responsibility is to invest in education to unlock that genius and enable the continuing realisation of human potential, building a society rich in knowledge and securing a sustainable quality of life for all.”

Professor Gu said Technion had shown the world what the future university should do in order to deliver values of regional, national and international significance.

He said economies in Guangdong and China are undergoing structural changes,to which industrial and technological innovations were critical factors for success.

“What Technion has done to advance the Israeli economy through student and staff research and innovation is an example for Chinese universities to follow,” Professor Gu said.  “If many universities in Guangdong and China do the same as Technion has been doing in Israel, an innovation-based economy will emerge.”

Professor Gu forecast that in 10 years’ time, TGIT will become the best technological school in Guangdong Province, and in 20 years, one of the best in China, with a number of new technologies and associated start-up companies being developed by TGIT’s staff and students.

In 30 years, TGIT will be recognized internationally for excellence in education and research, with special characteristics of technological innovation and entrepreneurship, and will have become the high-tech powerhouse in Guangdong Province, he predicted.

Professor Lavie described the partnership as “a major breakthrough and an opportunity to strengthen ties between Israel and China.”

“When you combine the innovation and entrepreneurial spirit of Israel with the unbelievable scale of China, you have a great partnership,” he said.  “We hope that by combining our research methodologies with the scale and resources of China, we will create a major research institute that will help not only China and Israel, but also mankind in general.

During the campus construction phase, the inaugural group of TGIT students will spend the first two years of studies at Technion in Israel, and will all come back to Shantou in their third year, in order to cultivate the culture of innovation locally.

Founded in 1912, Technion has earned a global reputation for its pioneering work in nanotechnology, life sciences, stem cells, water management, sustainable energy, information technology, biotechnology, materials engineering, aerospace and industrial engineering.  It is one of the top 100 universities worldwide, based on the prestigious Shanghai ranking, and one of the only 10 universities in the world that have built and launched satellites. Three Technion professors have won Nobel Prizes in the past nine years. A year ago, together with Cornell University, the Technion won an international competition to establish a research institute in the heart of New York. 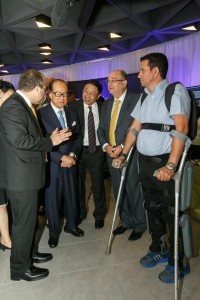