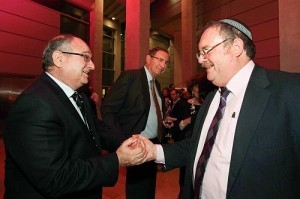 Amos Horev spoke about the years preceding the laying of the cornerstone and said that the decision to establish a university in this remote corner of the Ottoman Empire was in effect made because the Jews were prevented from higher education in Europe (“Numerus Clausus”).

Technion President Prof. Peretz Lavie spoke about the Technion in the coming years, in Haifa and in New York, and said that it is fortunate for all of us that Hebrew prevailed in the language war that preceded the establishment of the Technion.

Research Professor Aaron Ciechanover advocated creativity and spoke of the birth of medications that save the lives of millions of people every year.

Technion students pleased the audience with music and singing.

Members of the Israel Technion Society in the distant past were also represented in the event. Dr. Micha Levin, grandson of Dr. Shmaryahu Levin who was one of the main founders of the Technion, arrived with his wife, granddaughter of Yechiel Chelnov, who officiated the cornerstone laying ceremony in April 1912, and said in his speech, which he made in German, that the Technikum will be “a peaceful workplace, one that will be a blessing to the country and to the entire nation, and that will benefit the entire population, both Jews and non-Jews”.

The first donation to the Technion, in the amount of 100,000 rubles, was made by a fund set up by Kalonimus Wissotzky. Mr. Shalom Seidler, a descendant of the Wissotzky family and currently Chairman of Wissotzky Tea, arrived at the event with a donation of a different kind – a gift from Wissotzky Tea to the guests, with its blessing.

Above: Prof. Daniel Hershkowitz (on the right) with Technion President Prof. Peretz Lavie (on the left) and Dan Propper (in the middle). Photo: Technion Spokesman – Assaf Shilo / Israel Sun