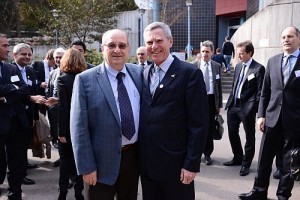 École Polytechnique and the Technion – Israel Institute of Technology are both establishments which are distinguished by their high standards of quality in terms of academics and research, and which have made supporting innovation and technology transfer a primary pillar of their strategy.  These universities both seek to share their experience and practices in the fields of innovation and entrepreneurship, particularly with regards to their academic programs in innovation management and their business incubators for start-ups created by students and researchers.

In addition to this common vision, École Polytechnique and the Technion – Israel Institute of Technology have already established numerous exchanges. For example, several Polytechniciens have undergone their research internships at Technion, particularly in engineering science (electrical engineering) and in computer science, two of its fields of expertise.

The signature of this accord will thus provide a reinforcement of the pre-existing academic ties between the two universities, facilitating cooperation, increasing educational opportunities, enriching their academic and research environments, and promoting international and intercultural understanding. This accord most notably provides a framework for hosting guest professors, student exchanges, and the development of research partnerships. A second accord, paving the way for a double degree program, outlines the conditions and specifications of the student exchange program: it concerns the exchange of Master’s level students for research internships and semesters abroad in the partner institution.

“École Polytechnique strengthens its international reach through the development of very high-level strategic partnerships with the top establishments worldwide. Its goal is to wield a network of first-rate partners in different regions of the world, and Israel Institute of Technology is among the target institutes for this international development policy,” comments Jacques Biot, President of École Polytechnique.

Technion President Prof. Peretz Lavie said that the agreement with École Polytechnique will add a new and important dimension to the Technion’s international relationships. He emphasized that “Israel and France have a long history of warm friendship and the language of science is a shared, common language that bridges cultures and peoples. I am convinced that École Polytechnique, an important French institution with a world renowned international character, will contribute a great deal to Technion. I hope that Technion, a world leader in the areas of science, engineering and medicine, will contribute to École Polytechnique, and that together we will contribute to all of humanity.”

Israel’s emergence as a world leader in high-tech can be largely credited to the Technion – Israel Institute of Technology, a global leader in cutting-edge research, innovation and entrepreneurship. Three Technion scientists have won Nobel Prizes in the past decade, and Technion researchers have made countless contributions to science, technology and medicine. Technion’s highly-trained graduates are the engine that drives Israel’s “Start-up Nation” economy. Technion’s powerful synergy with the tech sector in Israel has created an ecosystem of technological innovation, attracting numerous international tech giants such as Google, Apple and Microsoft, and inspiring hundreds of start-up enterprises in Israel and throughout the world. Together with its ranking as one of the world’s best sci-tech universities, it was Technion’s success in driving Israel’s high-tech sector that convinced New York City Mayor Michael Bloomberg to choose the Technion-Cornell partnership to establish a new, innovative applied science campus in New York, aimed as being a “game changer” for the city’s tech sector. Technion’s 13,000 students and researchers study in 18 academic departments and 52 research centers and institutes. As an increasingly globalized university Technion is developing a variety of international programs, and a growing number of foreign students are attracted to Technion for its outstanding reputation.

Largely internationalized (30% of the student body, 23% of faculty members), École Polytechnique combines research, education and innovation at the highest scientific and technological level. Its three graduate programs – Ingénieur Polytechnicien, Master’s and PhD – are highly selective and promote a culture of excellence with a strong emphasis on science, combined with humanist traditions.

École Polytechnique educates responsible men and women who are prepared to lead complex and innovative activities which will meet the challenges of 21st century society. With its 20 laboratories, all joint research facilities with the National Center for Scientific Research (CNRS), the École Polytechnique Research Center works to expand the frontiers of knowledge in the major interdisciplinary issues faced by science, technology and society.

As a ParisTech member institute, École Polytechnique is also one of the driving forces behind the Paris Saclay Campus project, along with its 22 academic and scientific partners.