Six students from the Rappaport Faculty of Medicine at the Technion recently returned from a working visit to Uganda. They participated in a new course entitled “Medicine in low-income countries,” and worked for several weeks in a rural hospital in Kiboga, Uganda. The Israeli Brit Olam non-governmental organization operates a medical aid program in this hospital. 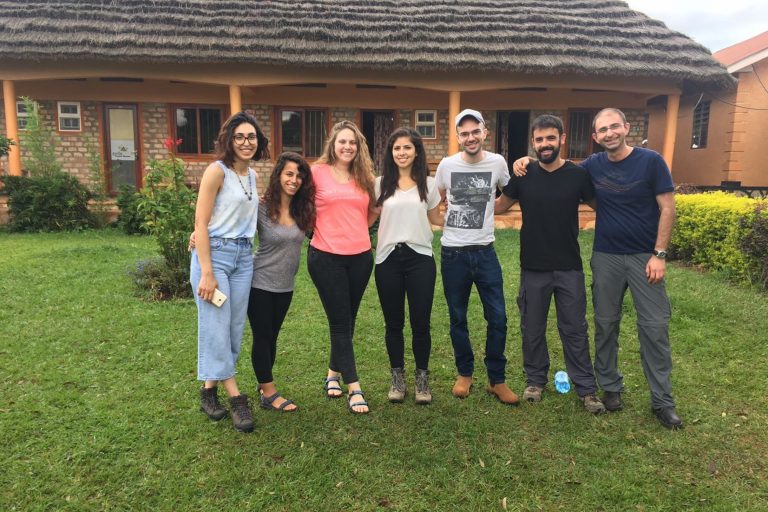 “One thing that caught my attention and amazed me was the acceptance of the reality,” recounted student participant Uri Shemesh. “All the family members we met see their loved ones suffering and even dying. It very obviously pains them, but they apparently understand that this is life in Africa and under the prevailing conditions sometimes little can be done to help. In contrast to what we are used to in Israel, none of the family members turned to us for help when we entered the department each morning.  They would wait patiently until we approached them, and even then, they seemed to have reconciled to the situation, with death – as if anything we could do was considered a bonus. I remember one case of a 10-year-old boy who came to the hospital with pain and 40° C temperature and couldn’t get out of bed for several days. His father just stood next to him day and night, without referring to us or asking for anything. Each time we approached his son, he just returned a thank you motion with his hands.”

While Israeli medical teams travel to developing countries in aid delegations, this is the first time Israeli medical students were given the opportunity to do so within the framework of an academic program with a tutor. The delegation was led (voluntarily) by Dr. D. A., a member of the Air Force Rescue Unit. Since the Uganda hospital had no imaging facilities, Dr. D.A. arranged a donation of a portable ultrasound unit and a simulator to learn the topic. This enabled the delegation members to perform imaging tests on their own, with online support from Israeli experts. Dr. Nira Beck, a Technion Faculty member and Director of the Ultrasound Unit at Rambam Hospital, assisted in this program. 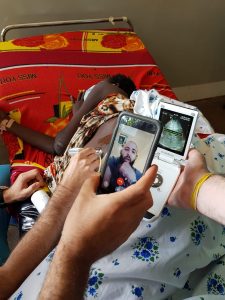 The simulator was developed by Simbionix –  a world-leader in the creation of simulators to practice complex medical procedures. The simulators enable medical teams to improve their clinical skills in a safe learning environment, which shortens the user’s learning curve.

Dr. D.A. summed up that “during our 14-day stay at the Kiboga General Hospital, we tended to tens of patients of various ages, suffering from a wide range of medical problems – internal illnesses, orthopedic problems, trauma injuries, surgical problems, and others. Some of the ailments were unique to Africa, while others were no different than those we meet daily in Israel, but the lack of resources and the very limited range of diagnostic, monitoring and therapeutic options, forced us to improvise and generate solutions ex nihilo. Although we were there for a very short period of time, I think it was a building experience. I am confident that the students learned a lot about the medical profession and about themselves and others. I hope that this experience will turn the participants into better doctors and possibly even better people who will continue to express interest and contribute to the development of medicine in developing countries.”

The delegation was masterminded by Dr. Ami Neuberger, a faculty member at the Technion Faculty of Medicine, a senior doctor at the Rambam Medical Center and a specialist in internal medicine and infectious diseases.  He has worked previously in Equatorial Guinea, Haiti, Nepal, Ivory Coast and South America and is currently the Director of the Travelers Clinic at Rambam Hospital. He explained that “during my visits to developing countries, I saw that leading Western universities send medical students to clinical rotations, and thought that it would be befitting for the Technion to do the same. It is important to be exposed to the reality of life in underdeveloped countries and is it also important to learn about diseases that do not exist in Israel. Luckily, my idea was embraced by Professor Shimon Marom, the Dean of the Faculty of Medicine and by Professor Ruth Margalit, a faculty member who has been involved in medical assistance to low-resource countries for years.”

Before the delegation set out, they went through a week of preparation that included lectures about the “Israeli medicine on the equator” project run by “Brit Olam”, lectures about tropical diseases and diseases common in Uganda, as well as discussions relating to the social and cultural interactions between a foreign medical team and the local population. The preparation was delivered by healthcare professionals from various hospitals, on a voluntary basis.

“Despite the high cost of the trip and the extensive amount of time dedicated to it,” said Dr. Neuberger, “we had ten candidates for each of the six available spots.”

The students who traveled to Africa were: 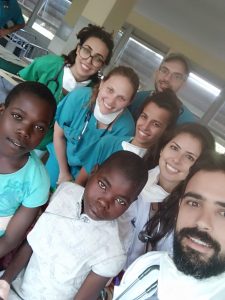 Ravit Gabai Yehezkeli (28) lives in Moshav Balfouria, near Afula. “My greatest hobby is to discover new things.  Already as a child, I moved over 20 times due to my father’s military service. Each house was an opportunity to discover a new place, to hike in a new area and to meet new people.  Ever since I continue to nurture this hobby by traveling throughout the world.” At the Faculty of Medicine, she combines her medical studies with muscle regeneration research.

Daniel Brue (29) is originally from Ramat Hasharon, and currently living in Haifa.  Daniel earned her BSc in Animal Sciences and will soon begin her fifth year of medical studies at the Faculty of Medicine. “I first traveled to Africa after my army service, and traveled the continent over several months, and volunteered for two months in an orphanage. I was taken by the magic of Africa and fell in love with the culture, the people and the scenery. Ever since I have dreamed of returning to experience it and to contribute on a professional level.”

Manar Baderna (23) was born in Sakhnin to two lawyers and grew up in Haifa. While studying at the Technion, she teaches in the Yoel Geva psychometric exam school. “I love to cook and travel.”

Ori Shemesh (29) lives in Ramat Gan and is due to get married in two months. He completed his BSc in Neuroscience at the Hebrew University of Jerusalem and will be beginning his fifth-year medical school. “In the past, I was a guitarist, playing mainly jazz and blues, but in recent years, it has turned into a hobby only.”

David Weiman (26) moved to Israel from Belgium 8 years ago. He served in the Givati Division and then completed his degree in Medical Sciences at Tel Aviv University. He will soon begin his fifth year of medical school studies at the Technion.

Nitzan Molho-Stav (28) is from Tel Aviv. “I love yoga, to travel abroad and to discover new places.” Nitzan recounts a story that particularly touched her heart when with the medical delegation in Africa.  A 13-year-old girl arrived in a life-threatening state with type I diabetes. “She was hospitalized and, most of the time was there alone. We treated her until her condition stabilized and when we wanted to discharge her, we understood that she didn’t have any insulin, which is vital for daily stabilization of her blood sugar levels.  We bought her a months-worth of insulin, which is considered very expensive there. A few days later, she was re-admitted in a life-threatening state. When we asked her if she had injected her insulin as we had explained to her, she said that she hadn’t – because she didn’t have any insulin. It’s impossible to know if she lost it or had to sell it, or didn’t grasp the severity of her condition and how much her life was dependent on this drug.  Bottom line, she is a 13-year-old child with a chronic disease and she has to take responsibility for her life as if she were an adult.”