Asst. Prof. Alex Szpilman from the Schulich Faculty of Chemistry at the Technion has developed a new class of radicals with stable structure. 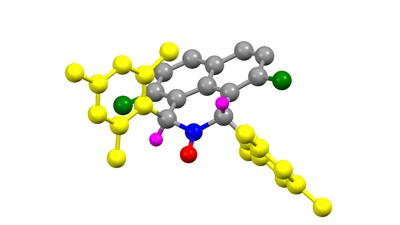 An illustration of a stable α-hydrogen nitroxyl radical – the stable radical developed by Asst. Prof. Alex Szpilman from the Schulich Faculty of Chemistry at the Technion

In a recent report, in the prestigious journal Nature Communications (published February 6th 2015), researchers under the guidance of Assistant Professor Alex M. Szpilman and Dr. Mark Iron of the Weizmann Institute of Science, have reported a solution to a decade-long conundrum: the preparation of stable α-hydrogen nitroxide radicals. These radicals have the potential to be used as both catalysts for chemical reactions and detectors for potentially harmful radicals in biological systems.

Radicals are formed in many chemical processes in nature, for example during metabolism in living cells. In spite of their bad reputation, which arises from their role in human disease, they have an important role in the immune system as “warheads” for killing infecting bacteria. Radicals also play a role in cell signalling.

Free radicals are molecules or atoms that have at least one unpaired electron. Usually electrons prefer to pair up, for example when forming a bond between atoms. When an electron is unpaired, the resulting radical is usually unstable. Indeed, radicals rapidly react with each other in order to pair up their electrons and form a bond between them. Radicals are often formed in our bodies with unwanted side effects and can cause damage to our cells, including to DNA. One of our key defense mechanisms is made up of radical scavengers such as Vitamin C and Vitamin E.

Although most radicals are extremely unstable and reactive, and consequently have a very short life span, there are exceptions. The first stable radical, triphenylmethyl radical, was discovered by chance in 1900 by Moses Gomberg at the University of Michigan. This historical event led to the development of other stable radicals. In 1960, the first nitroxide radical, TEMPO, was shown to be an exceptionally stable and useful radical. TEMPO and other nitroxide radicals have since been introduced to numerous applications including in the plastic and pharmaceutical industry as well as in medicine, agriculture and biochemistry (for example in measuring distances within DNA).

Unfortunately, known nitroxide radicals have several disadvantages such as difficult preparation and high cost. Since stability is often achieved by placing large atoms near the radical center, these radicals are simply too unreactive for many applications.

The design concept of “stable α-hydrogen nitroxide radicals” developed by the research team could bring about a revolution in the way we prepare and use radicals. Not only does it allow the preparation of stable radicals that are less encumbered due to the small hydrogen atom, and hence more reactive for chemical processes, but they are also likely to be useful for numerous other future applications. To quote the paper in Nature Communications “Multiple applications in catalysis, biology and medicine may be foreseen.”

The new nitroxide radicals have already been shown to be efficient catalysts for the aerobic oxidation of alcohols. These applications are illustrated both in the Nature paper and in another paper from the Szpilman group in the journal ChemCatChem.

Szpilman and his colleagues have demonstrated the generality of their ideas by preparing two different families of stable radicals. In both cases the synthesis of the radicals is easy, short, flexible, and starts from inexpensive readily available chemicals. The new radicals are more efficient catalysts for alcohol oxidation than the venerable TEMPO. The radical catalyst can be recycled and used over and over again which offers a significant advantage from the environmental perspective. Additionally, the only by-product of the reaction is water.

“Because the synthesis is so flexible we are now able to prepare tailor made radicals for different applications. For example, water soluble radicals for biological studies or more efficient catalysts for oxidation or polymerization (in plastic production) and other industrially important uses. The possibilities are endless. From the scientific point of view, we have the possibility of studying radical processes in biological systems. The understanding of these potentially harmful processes may eventually lead to the development of ways to treat or prevent disease.”

Alex M. Szpilman is a native of Denmark. He first came to Israel as a volunteer at Kibbutz Hamadia when he was 18. Upon completing his M.Sc. degree at the Technical University of Denmark (DTU) he returned to Israel for doctoral studies at the Weizmann Institute of Science. After postdoctoral studies at the ETH Zurich he started his independent career at the Schulich Faculty of Chemistry at the Tehcnion in 2009.

During his studies Szpilman worked on the total synthesis of natural products and the understanding of their biological activity, which is an applied branch of organic chemistry. Upon joining the Technion he decided to return to the study of fundamental chemistry. “It is my strategic approach to science to first research chemical discoveries of fundamental importance and then develop them further for use in synthesis and other applications,” he explains. “Chemistry is a wonderful and exciting field. A lot of creativity is needed in order to come up with new ways of making chemical bonds or new molecules. There is something incredibly rewarding in writing down an idea on a piece of paper and then making it come alive in the laboratory.”