A collaboration between researchers from the Technion – Israel Institute of Technology and the University of Debrecen, Hungary has led to the development of a novel experimental method that makes it possible to track the motion of a twin boundary at nanometer size scales and microsecond time scales. The paper, published in Advanced Functional Materials, was led by Professor Doron Shilo and the Ph.D. candidate Emil Bronstein of the Faculty of Mechanical Engineering, and Professor Ronen Talmon of the Andrew and Erna Viterbi Faculty of Electrical & Computer Engineering.

Twin boundary motion governs a highly prevalent deformation mechanism called “twinning.” This mechanism is found in a variety of materials (e.g., magnesium, titanium) and material classes (e.g., shape memory alloys, minerals, ferroelectrics). Because of this, understanding the behavior of twin boundaries has a crucial scientific significance and a direct influence on the comprehension of electro/magneto/thermo-mechanical responses of the aforementioned materials, and many more.

It has long been thought that when a material is rapidly loaded (e.g., by a strong, rapid electric impulse), a twin boundary propagates continuously at a velocity determined by the external loading. Contrarily, when a material is slowly loaded (e.g., by slow compression), twin boundary motion is discrete (discontinuous), and is characterized by short durations at which the twin boundary rapidly propagates separated by long durations at which the twin boundary is static. Despite being the same process, the link between the different behaviors (i.e., the responses to slow and rapid loading) has not previously been considered.

The researchers, however, developed a novel experimental method that enables direct tracking of the twin boundary motion by measuring the magnetic dipole changes of the material. The developed method can track the twin boundary during events that last a few microseconds (a millionth of a second) and have a characteristic size of nanometers. As a result, they provide direct measurements of the motion at unprecedented length and time scales. Analysis of the experimental results indicated, for the first time, that twin boundary motion under both slow and rapid loading can be explained by the same theory. The findings of this research have fundamental scientific importance, as well as a potential to improve actuators (motors) that rely on this process and are used in automobiles, aircraft, spacecraft, and biomedical applications.

Now, the researchers work on the development of data-driven, machine learning methods for the analysis of measured signals that will allow similar studies in a variety of materials and phenomena at short analysis times. 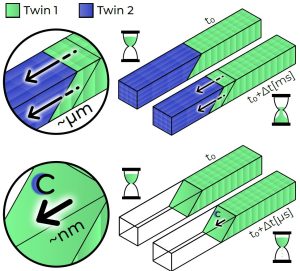