For the first time in the Formula competition for students
A helmet with a head-up display, enabling the driver to read the status of the car’s systems without taking his eyes off the road

This innovative invention was installed in the third Technion Formula car, unveiled last week in preparation for the FSAE, being held in Italy in September

The Formula car that will represent the Technion in the FSAE student world championship was unveiled last week. This is the third car built by Technion students, after the previous two recorded impressive accomplishments: two years ago (2013) the Technion Formula team won first place in the rookies category, and last year won first place for car design and improvement over the previous year. The upcoming race will be held in September, in Varano, Italy. 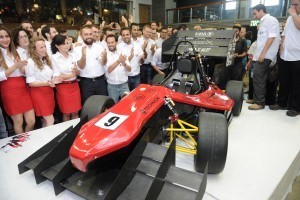 This year’s Formula project team has 11 advisors and 57 students from the faculties of Mechanical Engineering, Aeronautics, Architecture, Industrial Engineering and Management and Electrical Engineering and from the Department of Science and Technology Education. The team has six women students – a record number for the Israeli delegations to the competition. The project is headed by Evgeny Guy, a B.Sc. student, who last year headed the engine division. “Participating in this project is a tremendous investment,” said Evgeny, “but there are things that are worth more than a few grade points, and the practical experience we are getting here is one of them.”

Guy explained that the teams have made some substantial improvements and additions to the car, including reducing its weight by 15%; enhancing its aerodynamics; the pneumatic gear system; a wheel speed sensor; a suspension sensor; an accelerator sensor integrated with a gyroscope and a steering wheel angle sensor.

“In short, we have optimized all the car’s systems and I hope these improvements will be demonstrated in our achievements in the race.”

The 57 students work in specific project teams. The special projects team, headed by Michael Kuchenko, developed a series of sensors and a system with an upper display on the driver’s helmet, like a fighter pilot’s helmet – technology that enables the driver to read the status of the car’s systems without taking his eyes off the road. “This project is an opportunity for the practical application of our theoretical studies,” says Guy Ben Haim, who heads the engine division, “along with other crazies who share the same love for motor sports.”

The mechatronics team, headed by Ohad Basha, augmented the car with an acceleration sensor, a wheel speed sensor, suspension sensor and a steering wheel angle sensor, as well as a Bluetooth system for sending data to a computer.

“This is my first practical application experience at the Technion,” says Yochai Ackerman, who heads the suspension team, “and the experience I am gaining in the planning and execution and the work with the external suppliers is no less important than the theoretical studies.”

“The multidisciplinary cooperation is also excellent preparation for the real world, where you will need this kind of cooperation in almost every industry,” said Prof. Sidi at the event. “One day, when you are supervising a large project of national importance, or working on the development of a product that will change the lives of millions, you will remember where it all began.”