Technion - Israel Institute of Technology > Archive > Visit of Lord (Tariq) Ahmad of Wimbledon, Minister of State for the Middle East, to the Technion
Global

The meeting with the Technion’s management focused on academic collaborations

Lord (Tariq) Ahmad of Wimbledon, Minister of State for the Middle East, North Africa, South Asia, and United Nations at the FCDO (Foreign, Commonwealth and Development Office of the United Kingdom) and H.M.A. Mr. Neil Wigan, the UK’s Ambassador to Israel, along with other members of the FCDO and the Embassy, recently visited the Technion’s David and Janet Polak Visitors Center and met with Technion President Professor Uri Sivan and other senior members of the Technion’s management.

The meeting focused on diversity and inclusiveness in the academia, and on the expansion of research collaborations with universities in the UK. 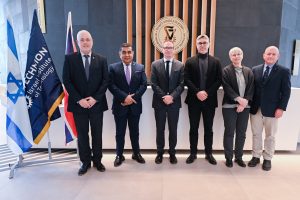 Lord Ahmad also met Professor Hossam Haick from the Wolfson Department of Chemical Engineering and expressed excitement about his research. Prof. Haick is a recipient of the BIRAX (Britain Israel Research and Academic Exchange Partnership) grant for his study into the development of a breath test for Parkinson’s disease.

President Sivan spoke of the important role of the Technion in Israel’s innovation scene and of diversity on campus. He also conveyed his wishes to expand the scope of Technion collaborations with British academic institutions.

Lord Ahmad expressed the UK’s commitment to strengthening and expanding the collaborations with Israel. 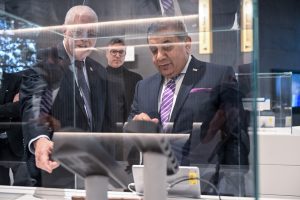