Uri Sivan: “Your contributions represent the essence of what the Technion was built on" 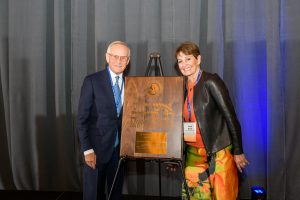 We are thrilled to announce that Andrea and Lawrence Wolfe have received the Albert Einstein Award, the highest recognition given by the American Technion Society (ATS). Expressing his gratitude for all of their support, Technion President Uri Sivan shared: “Your contributions represent the essence of what the Technion was built on: applying the knowledge provided by science for the benefit of humanity and producing the next generation of the brightest minds in science and engineering.”

Larry Wolfe has been a member of the American Friends of Rambam Board of Directors for many years. Andi is a member of the Technion Board of Governors and on the National Board of Directors of the American Technion Society (ATS). Both Andi and Larry have also been involved in many other projects in Israel and in the State of Michigan. Among their generous contributions, Andrea and Lawrence Wolfe have supported Professor Marcelle Machluf and her technology for drug delivery and cancer therapy, which helped her launch the biotech company NanoGhost. Over the years, their contributions have enabled Technion researchers to widen and further their impact in a variety of important fields.

On behalf of the Technion community, we sincerely thank you for your support!