The Shanghai Ranking, which ranks the world’s best universities, places Technion at 83rd

The Technion was ranked in 83rd place on the list of the world’s top 100 universities according to the Shanghai Ranking, the foremost index in the world for ranking institutions of higher education. The new ranking, published today (August 15, 2022), reveals that the Technion improved by 11 places compared to last year, where it was listed in 94th place.

Since 2012, the Technion has consistently appeared on the Shanghai Ranking Top 100 list (aside from 2020), and this year’s ranking is the highest that the Technion has received in the last four years.

Moreover, the Technion is ranked among the Top 50 institutions in the world in three categories: Aerospace Engineering (Technion is #22), Telecommunication Engineering (#40) and Automation & Control (#49). The index also places the Technion in the #51-75 range for Chemistry and for Transportation Science & Technology. 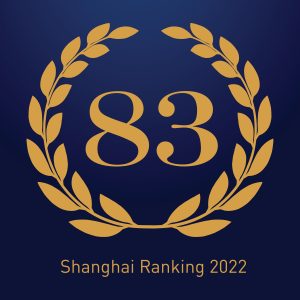 “The Technion’s presence on the list of the world’s top 100 universities and its improved ranking for two years in a row are a significant and important achievement,” said Technion President Prof. Uri Sivan. “It signifies international recognition of the Technion’s academic and research excellence, and I am very proud of our outstanding faculty. The Technion will continue to invest resources and effort in order to continue to improve in upcoming years. Our strength and success lie in our excellent human capital, which spearheads the numerous achievements and breakthroughs in research and teaching. These successes are the result of hard work and diligence by the academic and administrative faculty, faculty deans and the Technion’s management.

“The Technion’s placement in the Shanghai Ranking and others is not the be-all and end-all, and we will continue to strive for excellence using all the tools at our disposal,” the Technion President emphasized. “The global academic competition is rapidly intensifying, and while many governments around the world are constantly increasing their investments in academia and research, academic development in Israel largely relies on donations, and these are becoming increasingly difficult to obtain.

“In order for Israel to continue to improve its standing at the forefront of global research and to ensure the future of its universities, economy and security, the government must significantly increase its financial investment in research and teaching and adopt a friendlier approach toward admitting foreign students and faculty members. I am delighted that three Israeli academic institutions are listed among the world’s Top 100 universities, but it’s important to remember that without government support and globalization of research institutes, it will be hard for us to remain on the list.”

The Shanghai Ranking, which has been published annually since 2003, evaluates the level of academic institutions around the world according to objective criteria that include the number of Nobel Prize laureates and winners of other prestigious prizes, the number of scientific articles published in leading journals such as Nature and Science, and other indicators relative to the university’s size. The scrupulous Chinese survey examines 1,200 universities, of which 500 are designated leading universities.

This year’s list of the world’s best universities is once again headed by Harvard, Stanford, MIT, Cambridge and Berkeley.