The Technion recently inaugurated the new Amos Horev Sports Arena, named in honor of the larger-than-life general and former Technion president who pushed through various projects to improve student life during his nine-year tenure.

“The Technion is my home,” said Maj. Gen. (ret.) Horev during an October 28, 2021 ceremony attended by Technion President Uri Sivan, members of the Technion administration and board of directors, Friends of the Technion, and former and current Technion leadership. “I’ve always been involved in education . . . and I always aspired to promote excellence. . . Without excellence, our small country will not survive,” he said. “This new building is an expression of excellence. I thank all of you for your contribution to establishing this arena and am very moved to be here with you today.”

The new 21,500 square-foot arena features a court for handball, basketball, volleyball, soccer, badminton, and gymnastics, plus a 350-seat spectators’ gallery. The arena meets international standards, allowing it to host national and international competitions. Built with the generous support of the Friends of the Technion in Israel and around the world, the arena will be part of the 11-acre Technion Sports Village that provides tens of thousands of Technion students, faculty, and alumni with soccer fields, a running track, gyms, swimming pools, an indoor fitness center, and additional courts for squash, basketball, beach volleyball, and tennis. 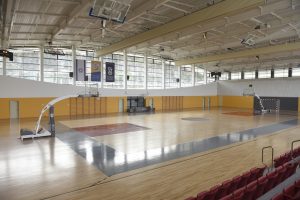 Speaking at the inauguration, President Sivan noted that Maj. Gen. Horev was born in 1924, the same year the Technion opened its gates. “Ever since, his life has intertwined with that of the Technion and of Israel,” he said. “During his years as president, the Technion’s status as a leader in fields of national importance, including the development of defense technologies, was greatly strengthened.”

Maj. Gen. Horev served in the Palmach, the elite fighting force of the Jewish underground army during the British Mandate for Palestine. He started to study mechanical engineering at the Technion, but his education was cut short with the outbreak of the War of Independence in 1948. He fought in Jerusalem and in the Negev and participated in the Burma Road convoy that broke the siege of Jerusalem. After the war, he earned his bachelor’s and master’s degrees at the Massachusetts Institute of Technology and then continued his military career as the Israel Defense Forces Chief of Ordnance, Quartermaster General, and Chief Scientist.

From 1973 to 1982, Maj. Gen. Horev served as President of the Technion, while also helping Rafael transform from a unit within the Ministry of Defense to Rafael Advanced Defense Systems Ltd. During his Technion tenure, he was instrumental in doubling the size of the campus and constructing the Rappaport Faculty of Medicine building. To support the students’ well-being, he had faculty members give lectures at Army outposts during the Yom Kippur War, and he established the university’s Psychological Services and an audio-visual library for self-study. He hired students for security and cleaning jobs to help make ends meet, and also helped establish student dorms, the university’s first pool, and the sports facilities. Maj. Gen. Horev continues today to serve as a member of the Technion Board of Directors and is Deputy Chairman of the Board of Governors.

“You always had a warm place in your heart for the students and looked for ways to support them. That is why we thought that the arena, which will serve many generations of students in the future, is an exceptionally fitting way to thank you for everything you have done for Technion students,” said Technion Vice President and CEO Professor Boaz Golany.

The Technion family thanks donors Robert Polak of Chicago, Ill.; William and Cynthia Marcus of Chestnut Hill, Mass.; former president of both the ATS – New England and National American Technion Society boards Edward Goldberg of Bozeman, Mont.; and Drs. Nathan and Fariba Fischel of Los Angeles, Calif., alumni of the class of 1983, for their generous contributions to building the new arena.