What do ultrasound imaging of a fetus, cellular mobile communication, micro motors, and low-energy-consumption computer memories have in common? All of these technologies are based on ferroelectric materials, which are characterized by a strong correlation between their atomic structure and the electrical and mechanical properties.

Technion – Israel Institute of Technology researchers have succeeded in changing the properties of ferroelectric materials by vacating a single oxygen atom from the original structure. The breakthrough could pave the way for the development of new technologies. The research was headed by Assistant Professor Yachin Ivry of the Department of Materials Science and Engineering, accompanied by postdoctoral researcher Dr. Hemaprabha Elangovan and Ph.D. student Maya Barzilay, and was published in ACS Nano. It is noted that engineering an individual oxygen vacancy poses a considerable challenge due to the light weight of oxygen atoms. 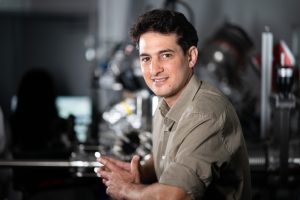 In ferroelectric materials, a slight shift of the atoms causes significant changes in the electric field and in the contraction or expansion of the material. This effect is the result of the fact that the basic repeating unit in the material contains atoms that are organized in an asymmetric structure.

In order to explain this further, the researchers use the seminal ferroelectric material, barium titanate, the atoms of which form a cubic-like lattice structure. In these materials, a unique phenomenon occurs: the titanium atom draws away from the oxygen atoms. Since titanium is positively charged and oxygen is negatively charged, this separation creates polarization, or in other words, an electric dipole moment.

A cubic lattice has six faces, so the charged atoms move into one of six possibilities. In different parts of the material, a large number of neighboring atoms shift in the same direction, and polarization in each such area, which is known as a ferroelectric domain, is uniform. 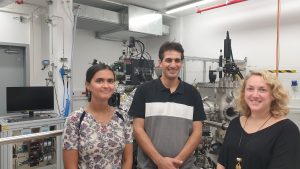 The research community has remained divided in opinion as to what happens in the two-dimensional world of the domain walls: How is the border between two domains with different electric polarization stabilized? Is the polarization in domain walls different to the polarization in the domains themselves? Can the properties of the domain wall be controlled in a localized manner? The great interest in addressing these questions stems from the fact that a ferroelectric material in its natural form is an excellent electric insulator. However, the domain walls may be conducting electrically, thus forming a two-dimensional object that are controllable by will. This phenomenon encompasses the potential to reduce significantly the energy consumption of data storage and data processing devices.

In this project, the researchers succeeded in deciphering the atomic structure and electric field deployment in domain walls at the atomic scale. In their recent article, they corroborate the assumption that domain walls allow for the existence of a two-dimensional border between domains as a result of partial oxygen vacancy in areas that are common to two domains, thus enabling greater flexibility in the deployment of the local electric field. They succeeded in engineeringly inducing an individual oxygen atom vacancy and demonstrated that this action creates opposing dipoles and greater electric symmetry – a unique topological structure called a quadrupole.

With the aid of computer simulations by Shi Liu of Westlake University in China, the researchers demonstrated that engineering the oxygen atom vacancy has a great impact on the electrical properties of the material not only at the atomic scale, but also at the scale that is relevant to electronic devices – for example, in terms of electrical conductivity. The significance is that the present scientific achievement is likely to be of help in miniaturizing devices of this kind as well as reducing their energy consumption.

In the micrograph: Image of the structure before (on the right) and after (left) removing an oxygen atom

In collaboration with researchers from the Negev Nuclear Research Center, the Technion research group also demonstrated that oxygen vacancies can be engineered by exposing the material to electronic radiation. Consequently, in addition to the technological potential of the discovery in electronics, it may also be possible to utilize the effect for radiation detectors, allowing for the early detection – and prevention – of nuclear accidents, such as the one that happened in 2011 in Fukushima, Japan.

The research, which was carried out at the Electron Microscopy Center in the Faculty of Materials Science and Engineering, was funded by the Israel Science Foundation and the Pazy Foundation. The Nano and Quantum Functional Structures Laboratory, headed by Asst. Prof. Ivry, is supported by the Zuckerman STEM Leadership Program.