The use of robots in construction and architectural manufacturing is a vision steadily becoming a reality and is perceived as a key trend in the next revolution in the construction industry. For years, complex architectural projects have been planned by computer. On the ground, however, these projects continue to be executed using construction methods that have remained virtually unchanged for decades.

In recent years, thanks to continuous development, robotic instrumentation has begun to close the gap between the level of planning sophistication and practical execution on-site. Consequently, anyone who has seen videos of robotic manufacturing processes in architectural projects will find it hard not to be swept up in the tide of enthusiasm. The good ones show robotic arms in motion, lifting building parts that interlock with ease. The pace of production is accompanied by accurate cutting and precise detail.

A computer rendered image of one of the segmented 3D models computed by the new algorithm.

Despite the impressive tempo of the robots and the infinite possibilities inherent in these production processes, human intervention is usually necessary behind the scenes from the production aspect as well as in calculating and planning the various deliverables. This is especially true when architectural planning is based on complex spatial systems such as thin, doubly-curved surfaces, also known as “shells.” 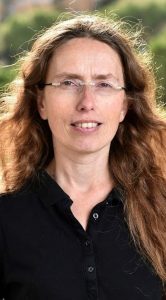 A research group from the Henry and Marilyn Taub Faculty of Computer Science at the Technion – Israel Institute of Technology is working on narrowing the gap between the promise and reality. The researchers, Professor Mirela Ben Chen, Dr. Kacper Pluta, and Michal Edelstein, together with their colleague, Professor Amir Vaxman of Utrecht University, responded to a request from an architect and developed an algorithm that finds automated solutions that meet robotic manufacturing needs for complex surfaces. The researchers created a computational framework that takes as input complex and diverse doubly curved surfaces and computes its segmentation into planar panels. The researchers have shown that the planar segments can be assembled from cardboard, a first step towards robotically manufactured shells made from timber.

“It’s important to recognize that industrial robotic manufacturing is not a technological whim,” Prof. Ben Chen explained. “It has numerous advantages in different aspects of sustainability such as material savings, reducing construction time and mitigating the environmental impacts of the construction process. The algorithm we developed can take complex surfaces and break them down into small segments, hexagons, in a way that increases the surface’s mechanical advantages. Further development of the computational tool will enable an optimal implementable solution to be devised.” 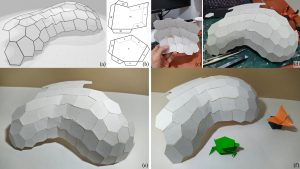 Fabrication of one of the models from construction paper. (a) Planar hexagonal mesh, (b) 2D face templates for cutting, (c-d) intermediate and (e-f) final constructions

“In order for the computational system to be applicative in the ‘real world’ as well, collaboration with architects is necessary,” Prof. Ben Chen continued. “Ultimately, we hope that our research will lead to the development of a system that can compute and manufacture building segments through automation, so that they can be assembled on-site without detracting from or compromising on architectural or structural complexity.”

Computer rendered images of face offset meshes generated from planar hexagonal meshes. Can be used for paneling with glass (left) or wood (right).

To read the researchers’ paper in ACM Transactions on Graphics, click here