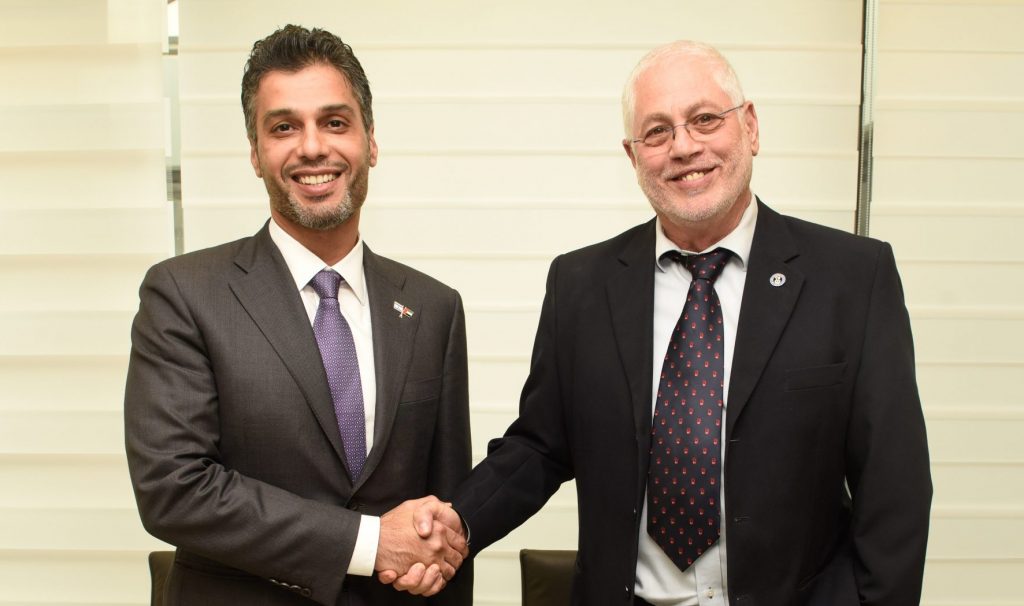 UAE’s Ambassador, H.E Mohamed Al Khaja holds a degree in political science from Northeastern University in Boston and an MBA from Vienna University of Economics and Business. For the past decade, H.E served as Chief of Staff to the UAE Minister of Foreign Affairs. Ambassador Al Khaja, 41, was sworn into his position in February 2021.

Technion President Sivan said at his meeting with the Ambassador: “The Technion is one of the few universities in the world that have had a significant impact and have transformed the economy of an entire country. It is thanks to Technion alumni that Israel established a highly developed, knowledge-intensive industry. The Abraham Accords with the UAE have opened up extensive opportunities for regional collaboration. Medicine, health, and science are subjects that connect people, and are delighted to be a party to research and academic collaborations with universities in the Emirates.” 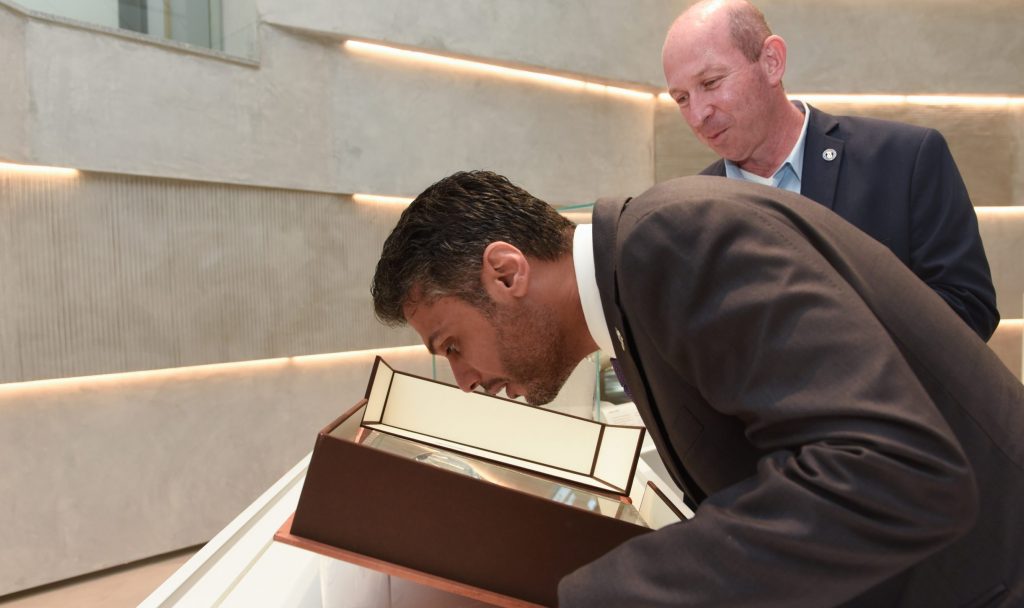 Taking a close look at the Technion Nano Bible: the Ambassador with Prof. Alon Wolf on a tour of the Technion Visitors Center.

The visit began with a tour of the David and Janet Polak Visitors Center, led by Technion Vice President for External Relations and Resource Development, Prof. Wolf, who presented to the Ambassador the research and technology discoveries and breakthroughs achieved by Technion researchers, including the discoveries of the Technion’s Nobel Laureates, which led to the establishment of groundbreaking tech companies. Two of these companies are Mazor Robotics, which was founded on the basis of technology developed by Professor Emeritus Moshe Shoham of the Faculty of Mechanical Engineering, and Novocure, founded by Professor Emeritus Yoram Palti of the Rappaport Faculty of Medicine on the basis of his technology.

Executive Vice President for Research, Prof. Rubinstein, presented the Technion’s diverse research to the Ambassador, as well as its numerous successful technology transfers. “In the past year alone,” he said, “the Technion founded 15 new startups – a huge increase compared to prior years.”

He also presented the Innovation Center for the Medicine of Tomorrow initiative to the Ambassador – a joint venture between the Rappaport Faculty of Medicine and Faculty of Biomedical Engineering, run by the Continuing Education and External Studies Division. “The Technion is unique in its many years of experience in training doctors and engineers,” continued Prof. Rubinstein. “The concept of engineering in service of medicine will greatly benefit the advancement of human health.”

“I am very honored to be the Ambassador of the United Arab Emirates to Israel, and consider myself as an ambassador of peace and cooperation,” Ambassador Al Khaja said. “We must work together to change the perception of people in the Middle East. The Abraham Accords have brought us all closer and have led us to work together for a better future. The Technion is an esteemed research center with a world reputation, and we will be delighted to collaborate on any research that will contribute to the wellbeing of the residents of the region. We will work together for the progression and success of research collaborations and student exchanges between our countries. Shared science and research will bring our countries and people closer.”

Ambassador Al Khaja said that in his previous position as Chief of Staff to the UAE Minister of Foreign Affairs he was engaged in innovation, technology entrepreneurship, and R&D. “This subject is close to my heart, and I will be happy to further encourage innovation and joint research between the Technion and our country, especially on issues associated with water and food security.”