Researchers at the Technion – Israel Institute of Technology’s Rappaport Faculty of Medicine have deciphered a mechanism that plays a key role in control of the immune system, preventing it from “going haywire” following a false alarm. The study was published in the Journal of Immunology and was recommended by the editorial board as a top read. 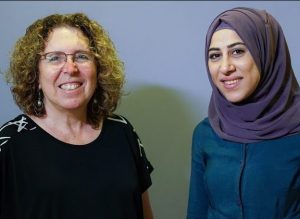 Authors Assistant Professor Debbie Yablonski and doctoral student Enas Hallumi focused on the role of the adaptor protein Gads in controlling the activity of T cells, which are an essential part of the immune system. Their main finding was that this protein serves as a kind of gate or barrier that prevents the immune system from launching an unnecessary attack. T cells are the “foot soldiers of the immune system.” When the body is attacked by an infection, tumor, etc., these cells multiply rapidly, attack the invader, and even mobilize other cells in the body to help them in the attack.

T cell function can be impaired in two main ways: as a result of hypoactivity or hyperactivity. As the term implies, hypoactivity causes a situation in which the body fails to attack the invader, and thus, the development of disease will not be prevented. By contrast, hyperactivity is liable to lead to a chain reaction that is harmful to the body, for example by creating an autoimmune disease or a cytokine storm – a term that rose to prominence during the current pandemic.

The researchers found evidence that an adaptor protein called Gads may be able to prevent a chain reaction of this kind from being initiated. In this sense, Gads serves as a gate that prevents an immune response for as long as the T cells have not been activated. The researchers also found that when the cells are activated by an invader – a virus, tumor, etc. – Gads is “tagged” by the addition of a certain chemical group. This occurs only when two other proteins (LAT and SLP-76) bind to Gads simultaneously to form a multimolecular complex. This binding action opens the gate and activates a T cell so that it may attack the invader. If, on the other hand, only one of the two proteins binds with Gads, the attack will not be launched. According to Prof. Yablonski, “In the present study, we discovered a mechanism that developed in the course of evolution to prevent false alarms, meaning a situation in which the body’s immune response spirals out of control and is liable to harm the organism itself by creating inflammation and other disorders.” 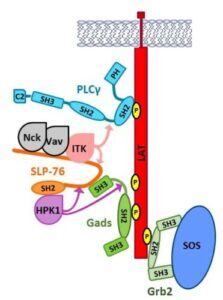 Dr. Debbie Yablonski is a faculty member at the Rappaport Faculty of Medicine (preclinical staff) and a member of the Russell Berrie Nanotechnology Institute at the Technion. She was born in the U.S. and completed her bachelor’s degree and Ph.D. at the Hebrew University of Jerusalem, and her postdoctoral fellowship at the University of California at San Francisco.

Click here for the paper in Journal of Immunology