Technion - Israel Institute of Technology > Archive > When did our brain become “modern”?
Medicine

The brain of the first migrants from Africa to Asia 1.8 million years ago was not a modern brain

Researchers from the Technion and the University of Zurich: Contrary to the prevailing assumption, the brain of the first migrants from Africa to Asia 1.8 million years ago was not a modern brain

Researchers from the Technion and the University of Zurich have published a dramatic discovery in Science Magazine about the characteristics of the brain of the first human migrants from Africa to Europe. To date, the accepted theory was that although these individuals – who migrated from Africa to the Caucasus about 1.8 million years ago – had small brains, these small brains had a modern structure similar to that of the human brain today. The present study proves otherwise: their brains were more ape-like than human-like.

One of the Dmanisi skulls (primitive brain, on the left) and a skull from Indonesia (a more modern brain, dating back 1.5 – 1.7 million years). Credit: Profs. MS Ponce de Leon and Christoph Zollikofer

Dr. Assaf Marom, head of the Anatomy and Human Evolution Laboratory at the Rappaport Faculty of Medicine at the Technion, participated in the study as a postdoctoral researcher for the lead authors of the article, Professor Marcia Ponce de León and Professor Christoph Zollikofer of the Anthropological Institute at the University of Zurich.

According to Dr. Marom, “Until now, it was assumed that the brains of the first migrants from Africa to Europe, although smaller than ours, were anatomically more similar to the brains of humans today than to the brain of a chimpanzee. The present research refutes this assumption; not only were their brains smaller than ours, but they were also more ape-like than human-like. Analysis of the structure of the braincase, particularly in the frontal lobe area, shows that it more resembled the frontal lobe of a primate than the modern human frontal lobe. The human frontal lobe houses neuroanatomical centers to which we attribute human higher functions: planning and decision making, speech, use of tools and instruments, complex social interaction and others.”

The discovery also refutes the belief that the early populations of the human species left Africa as a result of that same evolution into the modern brain structure; according to the new findings, they succeeded in migrating out of Africa and in surviving the journey despite the absence of such a brain. Dr. Marom emphasizes that the term “primitive brain” is not derogatory; those early humans possessed numerous cognitive skills that enabled them to defend themselves, lead cooperative social lives and make basic use of certain tools. “We explain these evolutionary processes as ‘coevolution’ – this is evidence that the development of those tools also played a part in the evolution of the human brain – not only as a result of cognitive skills, but also as their cause.”

Since brains do not fossilize, the study of the brains of ancient species is a tough challenge; consequently, we are forced to rely on indirect evidence such as skull remnants. In the present research, the brain was reconstructed using advanced, high-resolution computed tomography performed in a synchrotron – a particle accelerator, in Grenoble, France. Scans were performed on five skulls discovered in the prior decade in the ancient Georgian village of Dmanisi, the oldest evidence of human presence outside Africa, dated around 1.8 million years ago.

Main neuroanatomical differences between the brain of a chimpanzee (A, on the left) and the human brain (B). The main furrows are marked in red. The cortical areas (in yellow and blue) together form Broca’s area, which is responsible for speech production. The visual cortex (area 17) is in brown. The area marked with broken lines – Broca’s cap – creates similar bumps in human and ape endocasts. However, this bump refers to different cortical areas in the two species. Understanding this differentiation was the key to deciphering the endocasts of the Dmanisi individuals.
Credit: Profs. MS Ponce de Leon and Christoph Zollikofer

Based on the scans, Dr. Marom reconstructed an endocast, a cast made of the inside of a cranial cavity, shedding light on human neuroanatomy, i.e. the structure of the brain itself. CT scans produce horizontal, or axial, images (slices) of the brain, and Dr. Marom explains that meticulous work was required while reviewing the slices in order to remodel the three-dimensional structure of the endocast. The process yielded a reconstruction of the brain, including the convolutions and furrows of the cerebral cortex, and even its vascular network.

“Man became bipedal around 2.5 million years ago, but his brain was small and primitive. One of the important research questions in human evolution deals with determining the date of the neuroanatomical changes that transformed the brain from ape-like to man-like. Again, until now, it was commonly assumed that these changes occurred in Africa before the first migration to Europe, but we demonstrated that this assumption is incorrect, and those migrants of 1.8 million years ago had primitive brains.” 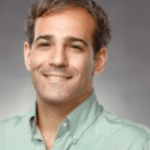 The conclusion drawn by the researchers is that the modern brain evolved in a later period – 1.5 to 1.7 million years ago, and at that time, more migrations from Africa to Europe had taken place. In its next study, the research team intends to explore the possibility that the “new” migrants with their modern brains encountered the descendants of the ancient migrants and maintained some sort of interaction with them.

Dr. Assaf Marom (M.D., Ph.D.) joined the staff of the Faculty of Medicine after completing his medical studies and doctorate in physical anthropology at Tel Aviv University, and his post-doctorate at the Anthropological Institute at the University of Zurich. He is head of the Anatomy and Human Evolution Laboratory, which integrates imaging and calculation methods to build models allowing for the discovery of when, why and how human beings came to be. Dr. Marom teaches anatomy at the Faculty of Medicine and the Faculty of Biomedical Engineering at the Technion.