How mRNA Formulates Its Instructions to Ribosomes

Dynamic, Sophisticated, and Environmentally Sensitive: How mRNA Formulates Its Instructions to Ribosomes

Technion researchers have discovered a new mechanism in the control of protein synthesis by ribosomes: an enzyme that edits mRNA and regulates its activity according to the organism’s needs. Their recent article describes similar gene editing processes to those used by Pfizer and Moderna in developing the new mRNA vaccines

In the diagram: Left: The vaccines. mRNA vaccines are based on the introduction of synthetic mRNA into cells to serve as a mold for building the viral protein that activates the immune system. Shortly after the mRNA molecules have penetrated the cell they begin to initiate production of the immunological proteins the cell needs. mRNA contains a number of chemical modifications that enhance its activity in the cell.
Right: The natural mechanism. The study published in Nucleic Acids Research demonstrates how similar chemical modifications occurring naturally in mRNA serve as links to control elements. These links affect ribosome activity, thus enabling protein production in quantities that are more accurate and are aligned with the organism’s needs.

Technion researchers have discovered an unknown mechanism that controls protein synthesis in the cell. The mechanism uses chemical modifications on mRNA to influence the rate of protein production by the ribosome, the cellular protein machine. The researchers, Professor Yoav Arava and doctoral student Ofri Levi of the Faculty of Biology, published news of the discovery in Nucleic Acids Research.

Gene expression control is responsible for translating the genetic code (written in DNA) into proteins that are adapted for their purpose in the specific tissue, taking changing environmental conditions into account. “If DNA is the cookbook,” said Ofri Levi, “then the chef is the ribosome – the cellular protein machine. The main mediator in the process is the mRNA molecule, which carries the recipe from the DNA to the ribosome. The right interaction between mRNA and the ribosome is vital to the normalcy and quality of the proteins.” 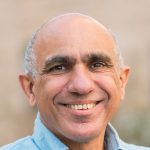 For some years, it has been known that mRNA does not carry the instructions from DNA in their original form, but undergoes numerous modifications on the way. These chemical changes recently made headlines in the context of the COVID-19 vaccines; the Pfizer and Moderna vaccines are based on the introduction of synthetic mRNA into the body to create immunological proteins inside our cells. However, since the cell treats mRNA as a foreign body, it tends to attack it, and the rapid mRNA breakdown does not leave it with enough time to manufacture the essential proteins.

To overcome this challenge, the two companies integrated modifications that mimic natural changes that occur in the body into their mRNA molecules. These modifications indeed enable the synthetic molecule to survive and to work long enough to create the protein from the virus.

According to Prof. Arava, “The connection between mRNA and the production of proteins is a process that has occupied us for some years, and we are focusing on the effect of mRNA on building the proteins and on their stability. We are trying to understand the ‘conversation’ in which mRNA tells the ribosome what to manufacture for the cell. We are conducting the basic research on Saccharomyces cerevisiae, a budding yeast that we know as baking or brewing yeast, and we have a solid basis to assume that what happens in the yeast is highly relevant to what happens in the human body.”

In a previous article published in PLoS Biology in July 2019, Mr. Levi and Prof. Arava presented a new role for certain enzymes prevalent in all kingdoms of life. The researchers discovered that these enzymes serve as significant control elements in protein production – a role that was unknown before the article was published. To perform this function, these enzymes bind to the mRNA and regulate the quantity of mRNA molecules available to the ribosome.

In the present study, Mr. Levi and Prof. Arava thoroughly explored the question as to how those enzymes identify mRNA among the medley of cellular components. They discovered that the answer lies in a unique chemical modification occurring in mRNA. This modification, known as pseudouridine, is created in various locations on mRNA; control elements identify the change and time ribosome activity accordingly.

To prove the importance of this modification, the researchers developed a method based on CRISPR/Cas9, which enabled them to “surgically” remove the psuedouridine without causing any other damage to the cells. Indeed, in the absence of psuedouridine, control of protein production was lost. According to Mr. Levi, “Like many scientists in the world, we too owe a huge thank you to Professor Emmanuelle Charpentier and Professor Jennifer Doudna for the dramatic breakthrough they achieved in the development of the CRISPR/Cas9 technology.”

Profs. Charpentier and Doudna were awarded the Technion Harvey Prize on November 3, 2019, and one year later, on December 10, 2020, they received the Nobel Prize in Chemistry for the development of the revolutionary technology for editing, repairing, and rewriting DNA. Thanks to this technology, Mr. Levi said, “we have been able to make progress in our research with unprecedented speed and accuracy.”

The Technion researchers estimate this is an evolutionarily conserved mechanism that exists across the animal kingdom. Since the mechanism is sensitive to environmental changes, it provides mRNA molecules with instructions tailored to environmental conditions, thus directing the ribosomes to optimal protein production.

As mentioned, one of the most important tasks faced by Pfizer and Moderna was to improve the activity of artificial mRNA in the human body, so they introduced a modification to the “immunological” mRNA that is very similar to pseudouridine. “We don’t yet know if the control elements we discovered are also able to detect the modification in synthetic mRNA,” said Prof. Arava. “If they are, this may open up further possibilities to improve mRNA activity and produce larger quantities of proteins.”

Beyond the present research and its implications, said Prof. Arava, “our discovery illustrates the importance of basic research in the development of sophisticated medical treatments and innovative vaccines. The public and the media are mainly hungry for publications about developments and applied science, but without a strong, broad infrastructure of basic science – in directions in which the applied horizon is not always clear – we would not witness such dramatic breakthroughs in diagnosis, treatment, and vaccines, as well as in areas of life outside the world of medicine.”

The research was funded by the Israel Science Foundation (ISF). Ofri Levi is the winner of the Jacobs Scholarship for Outstanding Students.

Click here for the complete article in Nucleic Acids Research.