The Schrödinger Medal Will be Awarded to Technion Distinguished Professor Yitzhak Apeloig:

The former Technion president will receive the medal for his seminal computational and experimental contributions to silicon chemistry and organic chemistry. 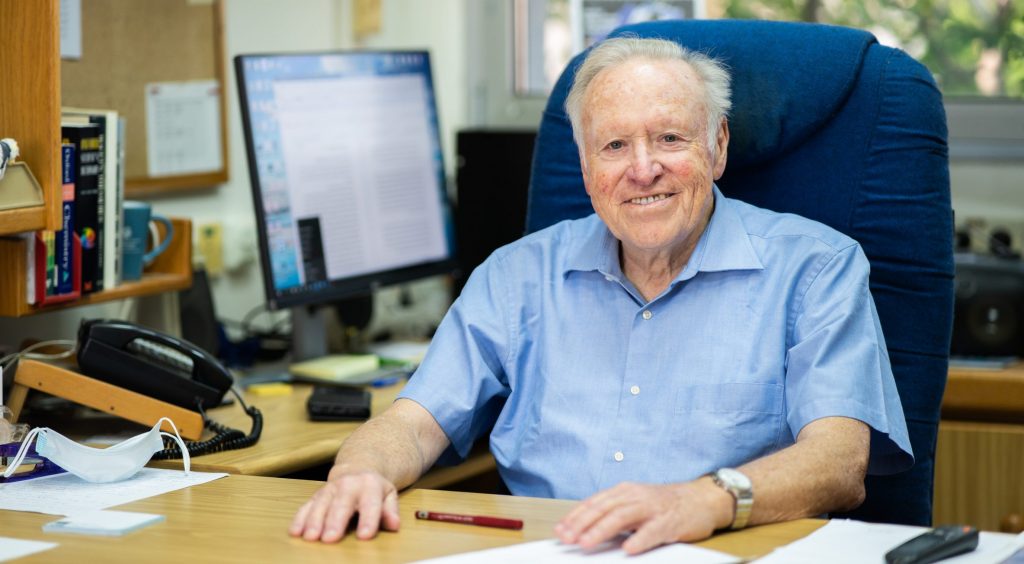 Distinguished Professor Yitzhak Apeloig of the Schulich Faculty of Chemistry has been awarded the 2021 Schrödinger Medal of the World Association of Theoretical and Computational Chemists (WATOC). Past recipients of this honor include four Chemistry Nobel Prize winners and many of the pioneers of computational quantum chemistry.

The prestigious medal is awarded each year to a single scientist whose contribution to theoretical and computational chemistry is particularly outstanding. Professor Apeloig’s selection was based on his seminal contributions to the chemistry of organosilicon compounds and to organic chemistry, and for the impressive combination of experimentation, computations, and theory in his research. Cover of a special issue of the European Journal of Chemistry, dedicated to the 65th birthday of Prof. Apeloig. The cover features molecules that Prof. Apeloig’s group studied experimentally and computationally. Below is the Schrödinger equation.

Professor Apeloig joined the Technion faculty in 1976 and served as President of the university from 2001 to 2009. He pioneered the use of computational tools based on quantum theory to predict molecular characteristics and molecular reactions, as well as organosilicon chemistry. He has received a plethora of important awards, including the Taub Award for academic excellence, the Distinguished Teacher Award from the Technion, the Humboldt Prize, the award of the Japan Society for the Promotion of Science (JSPS), the gold medal of the Israel Chemical Society, the Wacker Silicone Award, and the ACS Kipping Award in Silicon Chemistry. He is an honorary member of the American Academy of Arts and Sciences and a member of the European Academy of Sciences, holds an honorary doctorate of science from the Berlin Institute of Technology, has been awarded the Order of Merit of the President of the Federal Republic of Germany, and is an honorary citizen of Haifa, Israel.

The World Association of Theoretical and Computational Chemists (WATOC) aims to promote the field of theoretical and computational chemistry and to advance the interactions between scientists working in this field worldwide. Its most recent congress was attended by 1,500 scientists from all around the world.

The Schrödinger Medal is named after the Austrian physicist Erwin Schrödinger, one of the fathers of quantum mechanics and a Nobel Prize laureate who developed a wave equation named after him – the Schrödinger equation. The equation describes the behavior of atomic particles, for which Newtonian mechanics are inapplicable. The solution of the equation provides us with complete information about the properties of a particular molecule or compound and allows the prediction of the properties of unknown compounds. Solving the equation is very complicated mathematically, and until the development of electronic computers was only possible for very small molecules, like the hydrogen molecule. With the improvement of computing power, quantum-mechanical calculations have become possible also for relatively large molecules, and today – even for large organic molecules, like proteins.

Some WATOC members work on developing mathematical methods and computer programs to solve the equation. Others, including Prof. Apeloig, apply these methods to study and predict the characteristics and reactions of various compounds. Prof. Apeloig was one of the first experimental chemists in the world to realize the potential of computational methods and applied them in his research already in the 1970s. Today, many chemistry studies in the academy and in the industry (such as the development of new compounds, new medicines, etc.) are performed using computational methods, most commonly in a collaborative effort between experimenting and calculating research groups. One of the unique features of Prof. Apeloig’s research is that the experimental and computational research is usually performed by the same student, who acquires knowledge in both disciplines, an important factor in his/her scientific development.