Technion - Israel Institute of Technology and Tokushima University have signed an agreement to promote collaboration and joint research, especially through exchanges of postdocs and PhD students 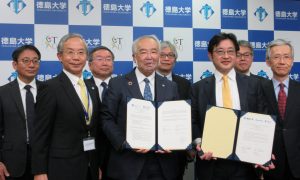 The new agreement will encourage research collaboration among top Japanese and Israeli researchers by expanding scholarly ties, facilitating academic cooperation, increasing educational opportunities, and promoting international and inter-cultural understanding. One of the main components of the agreement is the establishment of a track for doctoral students and post-doctoral researchers from Tokushima University to come to Technion on long-term programs, and vice-versa. 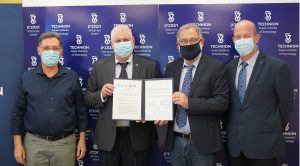 Nichia Corporation initiated the collaborative agreement between Technion and Tokushima University and will sponsor activities involving both universities. Nichia Corporation, headquartered in Tokushima, Japan, is a manufacturer of functional chemicals and opto-semiconductors. The company is a research and development-oriented company with two main business divisions: optical semiconductors, such as light-emitting diodes (LEDs) and semiconductor lasers (LDs), and functional chemicals, such as cathode materials and phosphors for lithium-ion batteries. The company maintains one of the world’s top market shares in each field of manufacturing. The company was founded in the manufacture and sale of pharmaceutical raw materials and has expanded into the manufacture of phosphors and other products by utilizing its reaction, purification and powder control technologies. Through the phosphor business, the company entered the optical semiconductor business and established the world’s first mass production technology for blue LEDs and blue-violet LDs. These technologies are applied to white LEDs in cell phones, televisions, automobiles and lighting. The company also has research institutes and a technical center in Anan (Tokushima Prefecture), Yokohama (Kanagawa Prefecture), and Shimosuwa (Nagano Prefecture), where it conducts cutting-edge research in the field of light and engages in  research and development to drive innovation. Nichia and Tokushima University have a long and close relationship that spans decades of joint research and Nichia frequently hires Tokushima graduates.