Lior Arbel’s doctoral dissertation goes beyond typical fields of practice in science and engineering. That’s because at its center stands a new hybrid musical instrument, or more precisely a family of musical instruments he calls “Symbolen.” 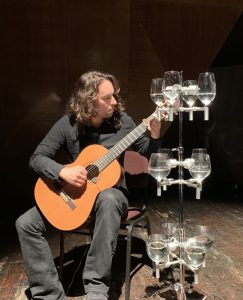 The science and engineering are well integrated into Arbel’s original invention.

“There is a complex combination of different aspects of physics, electronics, design and more,” explained Arbel. “We use tools and techniques of signal processing, waves, circuit design, mechanical simulations and optimization methods to create a system that will be useful and successful musically and design-wise.”

Symbolen is based on an array of wine glasses, which connect to a stringed instrument by electrical and mechanical means, and produces, mediated by signal processing, unique acoustic effects. The research and development were published in leading conferences and journals dealing with musical acoustics and musical instrument design.

The name of the musical instrument “Symbolen” is derived from two words. The first is “Sym,” from “sympathetic” language – that is, the transfer of energy between two different components in a system in a way that creates a common resonance. The second word is taken from “Bolen-Bolen” – the native name of the Australian bird Superb lyrebird, which mimics various sounds, including the sounds of other birds. According to Arbel, “When I thought of a name of my musical instrument, I realized that the glass system mimics the sounds of other instruments, and through the glasses you can still hear the special hue of the original instrument, whether it be a guitar, piano, etc. In the end, it’s nice that the name Symbolen also includes the world Cymbal – which is half of cymbals.”

The current Symbolen is based on a series of tools he built in recent years, with continuous trials and improvements. Eventually, the sound of the glasses was created as a result of an electrical or mechanical coupling, which greatly enriches the sounds of the glasses compared to a normal sound generated by a click. In the demos, the instrument is connected to Arbel’s classical guitar, but it can act under the influence of other instruments.

Arbel explained that he got the inspiration for the development from Indian musical instruments, such as the sitar and sarangi, which act on a sympathetic effect, that is the activation of a certain element through touch with another element. “These instruments are based on operating strings without contact with them, and I realized that it can be extended from strings to other instruments.”

Arbel learned the techniques for combining technologies with traditional instruments from modern musical instruments, such as the “chameleon guitar” developed at MIT, which allows for the replacement of its resonator board, and the “hydraulophone,” an organ that operates on water flow. Eventually, Arbel arrived at the array of wine glasses. Why? “Because there is a wide and available range of glasses, so that to produce vibration and sound requires little energy, and since I was interested in the unique effect that they add to the sound of my guitar.”

Each glass of wine has its own self-frequency, and if we make a sound next to it with the same frequency it will start to shake and produce a sound on its own. And so, in the Symbolen, each glass vibrates when the sound of the guitar sounding matches its own frequency. By filling the glasses with water, and using various means such as electromagnet, signal processing and magnetic pendulum, Arbel affects the self-frequency of the glass and the sound emanating from it. He has performed with the Symbolen several times in Israel and France and hopes that his prototype will serve as a basis for the development of new sympathetic tools.

Arbel completed his bachelor’s degree at the Andrew and Erna Viterbi Faculty of Electrical Engineering at the Technion and will soon complete his Ph.D. there (in a direct track). His supervisors are Professor Yoav Schechner from the Viterbi Faculty of Electrical Engineering and Dr. Noam Amir from the School of Communication Disorders at Tel Aviv University. He is also conducting his research as part of the Technion’s Industrial Design track headed by Professor Ezri Tarazi.