Researchers at the Technion-Israel Institute of Technology and the University of Bologna in Italy have achieved a dramatic improvement in the use of solar energy to produce hydrogen and other products. 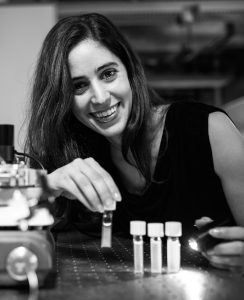 For decades, hydrogen has been considered the fuel of the future, because its burning releases only energy and water, and does not pollute the environment. But most of today’s hydrogen is produced from natural gas in a polluting process that contributes to global warming. A promising alternative for clean and renewable production of hydrogen is the splitting of water into hydrogen and oxygen, using sunlight, by a process called photocatalysis.

As a result, even though oxygen is not considered a valuable product, a great global effort was devoted to the development of photocatalytic systems that can achieve overall water splitting. These efforts, however, met little success. The water-splitting reaction involves several separate steps, and as a result, remains a significant challenge. As of yet, stable and efficient photocatalytic systems that can facilitate full water splitting have not been developed, and the search for means for green renewable production of hydrogen continues.

Now, in an article published in the journal Nano Energy, a creative solution to this problem has been presented.

The research was led by Professor Lilac Amirav of the Technion’s Schulich Faculty of Chemistry, together with colleagues at the University of Bologna. The group used unique miniature particles, developed several years ago by Prof. Amirav, as the photocatalytic system. These nanoscale particles (one nanometer is 10-9 m) present the greatest efficiency in utilizing light and the negative charges for the production of hydrogen. Now, the team demonstrates a new approach for efficient utilization of the positive charges as well, and a way for decoupling the desirable Hydrogen production from the problematic Oxygen evolution.

The researchers present remarkable photocatalytic activities for the production of hydrogen from water, while simultaneously transforming benzylamine to benzaldehyde. The benzaldehyde is produced using the positive charges, as an alternative to the production of oxygen. Used by the food, paint, plastic and cosmetic industries, it is considered a valuable product. The innovative process uses both the negative and the positive charges, thus utilizing solar energy in a more efficient and effective way.

“One could say that we have transformed the process from photocatalysis to photosynthesis, that is, genuine conversion of solar energy into fuel,” said Prof. Amirav. “In addition, the energy-conversion efficiency in this process sets a new world record in the field of particle-based photocatalysis.”

Prof. Amirav is referring to the fact that the photocatalytic system performs true conversion of solar power into storable chemical bonds, with a maximum of 4.2% Solar-To-Chemical energy conversion efficiency. This figure establishes a new world record in the field of photocatalysis, and doubles the previous record. More importantly, the U.S. Department of Energy defined 5-10% as the “practical feasibility threshold” for generating hydrogen through photocatalysis. The researchers’ success in solar energy conversion brings us to the doorsteps of economically viable solar to hydrogen conversion.

In the illustration: The vision of artificial photosynthesis as a way to improve human welfare. The illustration won first place in December in the SUN-ERGY competition. The competition was held as part of the Sunrise Initiative, whose goal is to develop renewable and non-polluting energy technologies.