The Technion – Israel Institute of Technology salutes the Apollo 11 heroes who landed on the moon 50 years ago. Buzz Aldrin, who will soon be celebrating his 90th birthday, was an honored guest at Technion Israel during the International Space University, which held its international program at Technion City. 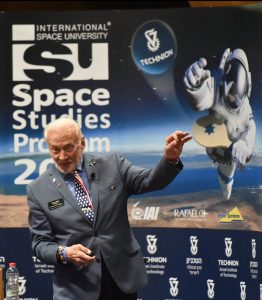 Buzz Aldrin at Technion in 2016

The first moon landing, starring Neil Armstrong and Buzz Aldrin, took place 50 years ago on July 20th, 1969. Armstrong descended from the lander to the moon, followed by Aldrin, who described the scene as a “spectacular wilderness” – a phrase he would later use as the title of his autobiography. The astronauts set up the US flag and a memorial plaque on the moon; carried out some pre-determined scientific missions; and spoke to the US President Richard Nixon. They then boarded the lander and returned to Columbia, the commanding cell, where Michael Collins, their colleague on the mission, was waiting for them all the time to orbit the moon. Apollo 11 began its journey back home. They positioned the flag of the United States of American on the moon, together with several other items, including greetings from 73 national leaders. One of these was from the President of the State of Israel, Zalman Shazar, who wrote: “From the President of Israel in Jerusalem, as long as there is a moon, there will be peace.”

Dr. Buzz Aldrin visited the Technion in 2016. In his lecture at the Technion, Dr. Aldrin said: “I have no doubt that I am lucky. My mother was born when the Wright brothers made the first flights in history, and my father was one of the pioneers of the aviation world. I just flew jets in the Korean War and made spacewalks, and yet I got to go on the moon.”

Dr. Aldrin, a graduate of West Point Military Academy and a former combat pilot, received his Ph.D. from MIT in 1963. He was accepted as an astronaut in 1963 and in the summer of 1969, he landed on the moon. “We got a chance to land on the moon, and the opportunity became a milestone, an event that changed the history of mankind,” he said in his lecture at the Technion. “Humanity has succeeded in setting foot in a new and entirely different place: 400,000 people have been involved in the success of this mission and half a billion have watched us in that historical event.”

Over the last three decades, Dr. Aldrin has invested most of his time in the mission of manning Mars. He established the Buzz Aldrin Space Institute in Florida to promote settlement on Mars, with the target year of 2040. “Mars is the island waiting for us in the dark of space: Get your Ass to Mars, because there, as President Kennedy said about the mission of landing on the moon, we have a connection with fate.”

This year, following the crash of the Israeli ship Bereshit, Aldrin tweeted to the project’s people: “Never despair – your efforts, your innovation and the work of your team are an inspiration to us all.”

Like his colleague, Neil Armstrong, the first man on the moon, was born in 1930. As a teenager, he worked hard to finance the flight rates that were his ultimate ambition, and at the age of 16, he received a pilot’s license. At the age of 20, he was a fighter pilot, and in the next two years, he performed almost 80 combat flights in Korea. In 1966, as a fresh astronaut, he saved himself and his crew after a dangerous mishap at Gemini 8.

Over the next three years, Armstrong gained extensive experience on the ground and in space and was eventually appointed the commander of the first moon landing mission, Apollo 11. And so on July 20, the voice in the control room said: “Here is the calm sea base. After performing all the steps required for the historic march, he reported this time to half a billion listeners and viewers: “A small step for man, a tremendous leap for mankind.” Four days later, on July 24, 1969, Apollo 11 landed in the Pacific Ocean.

In July 2007, Armstrong visited Madatech in Haifa and spoke with students from the north of Israel. In response to one of the questions, he said that: “the purpose of the flight to the moon was to expand our knowledge, and indeed, we learned that the human race is not connected to the earth in chains, we can go out and live in other places.”