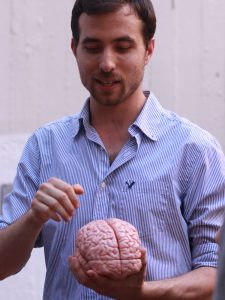 Research projects of Technion undergraduate students in their fourth year of studies were showcased recently at the annual project fair at the Faculty of Biomedical Engineering. Shaked Ron won the first prize of NIS 1,500 for the development of advanced methods for the functional mapping of the cerebral cortex during awake brain surgery. Ron is a student in the double degree track in medicine and biomedical engineering and is currently studying in the Gutfreund Laboratory at the Rappaport Faculty of Medicine. He also works at Mazor Robotics, which was recently acquired by the giant Medtronic for $1.6 billion. Mazor Robotics’ system – which helps surgeons perform accurate surgeries – is based on technology developed by Prof. Moshe Shoham of the Technion Faculty of Mechanical Engineering.

Dean of the Faculty Prof. Shulamit Levenberg thanked Liat and Doron Adler, who annually donate the prizes to the winners and Assoc. Prof. Nati Korin, who is responsible for the project course. “The conference is one of the peak days in the Faculty’s life, and the projects presented by the students here bring to the realization all the knowledge they have accumulated in the faculty during their years of study,” she said. “As in the world outside of academia, students are also required to combine many skills – including engineering thinking, teamwork, creativity, entrepreneurial thinking and cooperation with various laboratories and companies.”

“Awake craniotomy is usually performed in the cases of brain cancer of severe epilepsy,” said Shaked Ron. “Functional mapping is performed during the operation, allowing the removal of as much of the abnormal tissue as possible without damaging brain function.”

The winning project uses the Electrocorticography (ECoG) method, which may optimize and could replace the traditional mapping method of electrical stimulation of the cortex (ECS) in the future. ECoG is a passive process: in other words, it’s a process that does not require stimulation. Experts in this field estimate that such a process will reduce the risk to the patient.

In the winning study, Shaked Ron developed a system that enables ECoG mapping of brain activity while synchronizing between the assignment of tasks to the patient and recording of electrical signals from the cortex. Once the information has been processed, the system presents an image-support-decision to the team in the operating room. The work was conducted under the guidance of Dr. Firas Mawase and Dr. Amit Livneh of the Faculty of Biomedical Engineering and Dr. Omer Zarchi of the Rabin Medical Center (Beilinson). 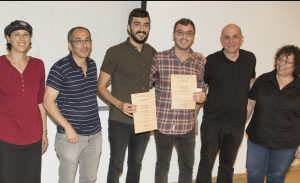 In second place, students Ameer Lawen and Majd Machour were awarded for their excellent research in intercellular communication based on volatile organic components.  The work was supervised by Dr. Arbel Artzy-Schnirman from the laboratory of Prof. Hossam Haick at the Wolfson School of Chemical Engineering at Technion.

Students Auralie Abehssera and Natalie Cohen came in third for the development of an automatic process for the preparation of nanometric particles for treating head and neck cancer. The work was conducted under the supervision of Dr. Arbel Artzy-Schnirman and Hagit Sason-Bauer at the laboratory of Dr. Yosi Shamay of the Faculty of Biomedical Engineering at Technion.

In fourth place, students Ofri Goldenberg and Yuval Ben Sasson were awarded for the development of technology for the automatic monitoring of a genetic disorder that influences heart function. The work was conducted under the supervision of Ido Weiser Biton and Aviv Rosenberg at the laboratory of Prof. Yael Yaniv of the Faculty of Biomedical Engineering.

Fifth place went to students Gal Shleifer and Yael Pistunovich, who developed a recording system for the analysis of cardiovascular signals.  The work was done under the supervision of Aviv Rosenberg, Ido Weiser Biton and Yaron Blinder in the laboratory of Prof. Yael Yaniv of the Faculty of Biomedical Engineering at Technion.