The Bruce and Ruth Rappaport Foundation has made a transformational gift to Technion for the establishment of the Rappaport Integrative Cancer Research Center and the Rappaport Building for Advanced Medical Research adjacent to the Ruth and Bruce Rappaport Faculty of Medicine.

The contract for the establishment of the Rappaport Integrative Cancer Research Center was signed at the ceremony. The two events took place at the Rappaport Faculty of Medicine in the Bat Galim neighborhood of Haifa. 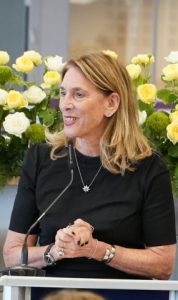 Ruth and Bruce Rappaport were philanthropists whose magnanimous support enabled the creation of the Rappaport Medical Faculty Building and the Rappaport Institute for Research in the Medical Sciences at Technion. In the early 1970’s, the Rappaports were enlisted to help Technion expand the activities of its Faculty of Medicine – which until then had been located in a former monastery building in the Rambam Hospital courtyard. Ruth and Bruce responded to the request by then-dean and faculty founder Prof. David Erlik, and contributed the funds for a magnificent 14-story building which houses the faculty to this day. The building was inaugurated in 1979, and even then, the Rappaports believed that faculty members would someday win a Nobel Prize – a prophecy that came true in 2004 when Profs. Avram Hershko and Aaron Ciechanover won the Nobel Prize in Chemistry.

Throughout the years, the Rappaports continued to support the Faculty of Medicine and the Institute, striving to transform them into a focus for medical education and regional support for all the Middle East. Bruce was fond of quoting Shimon Peres, who often said that science, illness and healthcare have no borders. Any research that proves beneficial in one part of the world, he would say, will ultimately benefit the whole world. His wife Ruth, used to say, “the connection between the Technion and the Rappaport family is a love affair that passes from generation to generation. There is no greater joy than seeing brilliant young men and women, year after year, join the amazing ranks of doctors in the State of Israel, and there is no greater satisfaction than providing a cure for sick people.”

The Rappaport family also contributed generously to the Rambam Healthcare Campus, and in 2014 the Ruth Rappaport Children’s Hospital opened.

After Bruce’s death in 2010, Ruth continued his philanthropic legacy, and since her passing last year, their daughters Irith and Vered have continued their generous support for scientific research.

The Technion is celebrating the establishment of the Rappaport Integrative Cancer Research Center, an idea, conceived 20 years ago by Nobel Laureate Aaron Ciechanover, which will become a reality thanks to the Rappaport family. The center will be housed in the new Advanced Medical Research Building adjacent to the Rappaport Faculty of Medicine Building.

Ciechanover’s vision together with the generosity of the Rappaport family through the generations has made the Technion Faculty of Medicine a leading global center for cancer research. 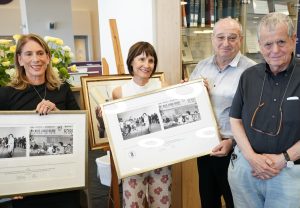 Irith Rappaport said: “In my personal view and that of my family, the role of private philanthropy is to support infrastructure that facilitates research and basic science. Our job is not only to support research and science, but also to exercise our right to give philanthropically while maintaining the highest ethical standards. Philanthropic support of science should cherish the value of pursuing ground-breaking science, knowing that even though a certain percentage of the research may not succeed, we will still be able to garner insight for the benefit of society and humanity as a whole.”

“Two quotations reflect my excitement at the generous contribution of the Rappaport family and the opportunity it affords us to concentrate multidisciplinary efforts by doctors, scientists, and engineers to advance the understanding of the complexity of cancer and to pave the way for discovering new therapies,” said Nobel Laureate Aaron Ciechanover. “The first, ‘If there is no flour, there is no Torah,’ is a saying by our sages that Bruce Rappaport often quoted in order to explain his world view. The second, “If you think research is expensive, try disease!” is by Mary Lasker an American health activist and philanthropist who worked to raise funds for medical research. She would say this in order to explain the connection between basic research and medical advancement.

“The contribution of the Rappaport Foundation to the establishment of the Interdisciplinary Center for Cancer Research,” added Technion President Prof. Peretz Lavie, “places Technion at the forefront of scientific research in efforts to eradicate the disease. I am convinced that with the help of the generous gift, the dreams of the founders of the Rappaport Faculty of Medicine will be realized. A dream in which transdisciplinary cooperation between engineering, life sciences, and medicine will lead to breakthroughs in the diagnosis and treatment of disease.”

“I watch from the side in amazement, wonder, and admiration at what you have done here. Like many others, I also spent numerous hours in the oncology ward nearby, accompanying close relatives,” said Haifa Mayor Dr. Einat Kalisch-Rotem. We always hoped for a better future in the field of cancer, a future where there is a cure for this disease. I am very moved to stand here at this event, that we dreamed of for many years.” The mayor told the guests, “Your job is to heal and my job is to make sure that there are fewer patients. I take off my hat and thank the Rappaport family, the Technion, and everyone involved in this wonderful initiative.”