During his distinguished career as a theoretical physicist and cosmologist, the late Stephen Hawking predicted that black holes – invisible and massive phenomena in space with such strong gravity that nothing, even light, can escape its deep, dark grasp – emit radiation.  This Hawking radiation should have a thermal spectrum, similar to the radiation from any warm object. The temperature of the Hawking radiation should agree with the temperature predicted by Jacob Bekenstein. 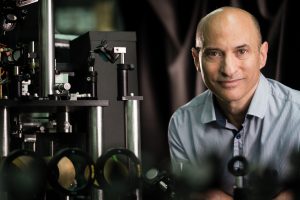 Now, a team of researchers from the Department of Physics at the Technion–Israel Institute of Technology have created an artificial black hole in which sound plays the role of light. By devising a way to measure the spectrum of Hawking radiation, they have found that artificial black holes do emit radiation like an ordinary warm object, as Hawking’s predictions asserted.

A paper explaining their groundbreaking research appeared in the May, 30 2019 issue of Nature.

Almost four decades ago, a theory emerged suggesting artificial black holes could be constructed and used to measure the physics of Hawking radiation, a type of thermal radiation, the existence of which Hawking predicted in the 1970s and which now bears his name. However, it was the task of creating an artificial black hole, and devising ways to measure the spectrum of Hawking radiation and its temperature, that led to the recent breakthrough.

The success of their work is yet another profound insight into the nature of black holes, among the most mysterious and least understood secrets of the universe.

The concept of an object in space with gravitation fields too strong for light to escape was considered in the 18th century. The first modern theory about the existence of black holes was developed in 1916, but not fully characterized and considered to be just mathematical curiosities until the late 1960s, when theories were sparked by knowledge about the collapse of massive stars. Although they could not be seen, a consensus was soon reached that black holes existed in most galaxies.

Having studied this phenomenon and problem for a decade, the research team made constant improvements to their experimental tools over the last three years. The goal was to not only create artificial black holes, but also to develop methods to make measurements to check Hawking’s predictions. To reach their conclusions, the Hawking radiation experiment was repeated 7,400 times providing a density profile for each “run”, from which the researchers computed averages.

“Theoretical works, combined with our long-term study of this subject, allowed for the observation of spontaneous Hawking radiation in an artificial black hole,” reported Steinhauer.  “The improvements in our experimental apparatus allowed us to measure the thermality of the Hawking spectrum and compare its temperature with Hawkings’ prediction, given by the surface gravity.”

According to the researchers, this temperature (as predicted) provides an interesting link between the theories of Hawking and those of astrophysicist Jacob Bekenstein.  In 1972, Bekenstein also presented a theory on black hole thermodynamics.

“Remarkably, although their calculations were based on very different ideas, both Hawking and Bekenstein came up with the same conclusion that the temperature was determined by the gravity at the surface of the black hole,” said Steinhauer. “We confirmed their predictions.”

While the discovery made by the Technion physicists makes clearer the nature of artificial black holes by measuring the spectrum emitted (very similar to the spectrum that would be emitted by an ordinary warm object), the low levels of radiation not only confirm Hawking’s theory, but could also lead to further research.