Researchers from the Technion, in collaboration with Japanese and American scientists, have discovered how cyclic peptides inhibit the breakdown of proteins that help cancer grow and thrive. The researchers believe the strategy they have developed will pave the way for new types of anticancer treatment based on cyclic peptides. 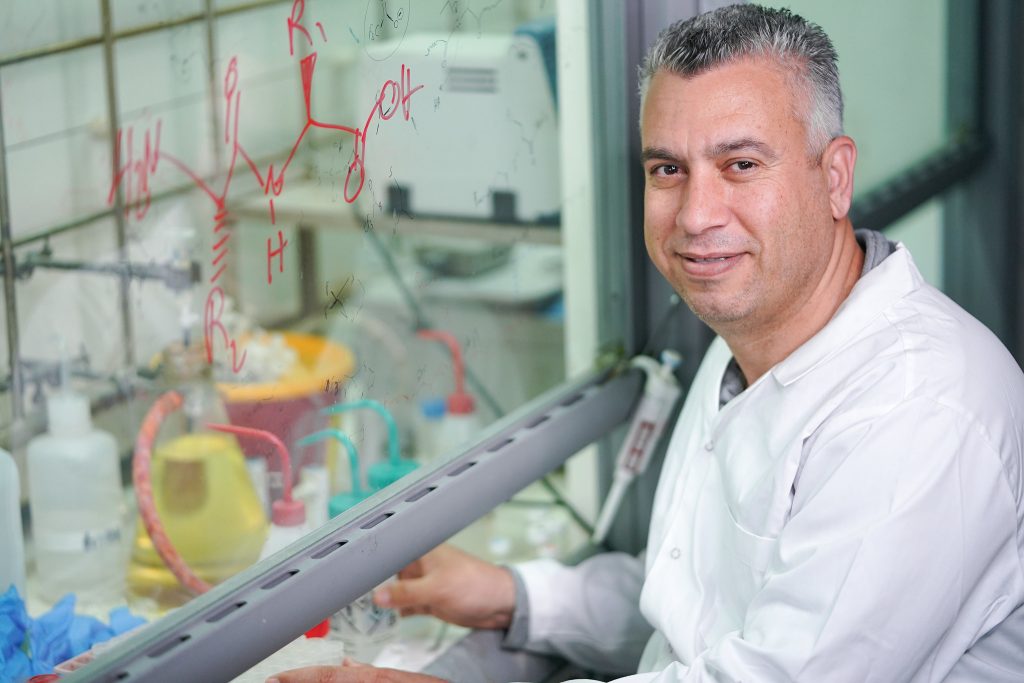 Prof. Ashraf Brik of the Schulich Faculty of Chemistry at Technion – Israel Institute of Technology

Researchers from the Technion, in collaboration with Japanese and American scientists, have developed an innovative strategy for eliminating cancer cells. The research was recently published in Nature Chemistry by Prof. Ashraf Brik of the Schulich Faculty of Chemistry at the Technion, Prof. Hiro Suga of the University of Tokyo, Nobel Laureate in Chemistry and Distinguished Prof. Aaron Ciechanover of the Technion’s Rappaport Faculty of Medicine, and Prof. David Fushman of the University of Maryland’s Department of Chemistry and Biochemistry.

The study is a dramatic milestone in the application of the discovery of the ubiquitin system that led to the 2004 Nobel Prize in Chemistry for Distinguished Professors Avram Hershko and Aaron Ciechanover, and Dr. Irwin Rose. The trio of researchers discovered how unique proteins, which they called the “ubiquitin proteins,” label defective proteins with a “death tag” that leads to their breakdown in protease, also known as the “cellular garbage can.”

Proper functioning of the ubiquitin system is essential for the healthy functioning of the organism, not only in the context of the breakdown of used proteins, but also in many other functions. Disruptions in this system cause serious diseases, including various cancers, amyotrophic lateral sclerosis (Lou Gehrig’s disease), cystic fibrosis, Parkinson’s disease, and other neurodegenerative disorders.

The discovery of ubiquitin paved the way for a new field of research, and many research groups around the world have been working on the ubiquitin system and harnessing it for developing innovative medical treatments. To date, four such drugs have been approved for the treatment of cancer in general and multiple myeloma in particular. These drugs have already saved the lives of many people around the world, but according to Prof. Brik, “the progress in the study of the ubiquitin system and the development of drugs based on its understanding are very slow relative to its potential.”

The first stage in the normal natural activity of the ubiquitin system is the creation of chains of ubiquitin (polyUB chains) that later label the proteins to be broken down. The problem is that when cancer develops in the body, cancer cells know how to carry out manipulation in the ubiquitin system and exploit it for survival and proliferation.

The strategy developed by the group headed by Prof. Brik was designed to neutralize the ability of the malignancy to perform the same manipulation. This strategy is based on an unprecedented combination of Prof. Brik’s skill in producing ubiquitin chains using advanced chemical methods and Prof. Suga’s method of creating very large libraries of molecules called cyclic peptides. As part of the collaboration, the researchers discovered how these cyclic peptides bind to the ubiquitin chains and thus inhibit the breakdown of proteins that help cancer to grow and thrive. They believe the strategy they have developed will pave the way for new types of anticancer treatment based on cyclic peptides.

Prof. Ashraf Brik holds Jordan and Irene Tark Chair in the Schulich Faculty of Chemistry. The current study is supported by the US National Institutes of Health (NIH), the Miriam and Sheldon Adelson Foundation, the Israel Science Foundation (ISF), the Germany-Israel Foundation for Research and Development (GIF), and the Israel Cancer Research Foundation (ICRF).