Robots and High-School Pupils Participate in the FIRST Robotics Competition

Some 12,000 elementary and high-school pupils aged six to 18 will join dozens of robots from April 2 to 4, 2019 for this year’s FIRST Robotics Competition.

The event, organized by Israel FIRST (the acronym for “For Inspiration and Recognition of Science and Technology”) and the Technion-Israel Institute of Technology will be held in the Menora Mivtachim Arena in Tel Aviv.

FIRST Israel, which became an official Technion project in 2013, aims at preparing and fostering promising youngsters to be the leaders and entrepreneurs of the future. This is done through innovative robotics programs providing scientific, engineering and technological inspiration to pupils, who are guided by engineers and experts from academia, industry and the military.

More than 200 groups are involved in encouraging teams of pupils from kindergarten to 12th grade to excel in programs that combine excitement and creativity and nurture life skills.

The competition will be held in Tel Aviv on Tuesday through Thursday this week with the theme “Destination: Deep Space.”

As part of the competition, the pupils were asked to build robots that could load spaceships and climb stairs, all in six intensive weeks of planning, drafting, building and programming. 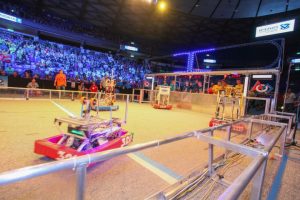 FIRST is an international, non-profit organization founded in the US 27 years ago by the inventor of the Segway, Dean Kamen – a serial entrepreneur and advocate of science and technology who holds more than 440 patents in the US and other countries. The organization was established to inspire young people, promote motivation and curiosity and encourage them to pursue engineering, science and technology.

FIRST was founded in Israel 15 years ago by Major-General Avihu Ben-Nun, in cooperation with the Technion. This activity is dependent on the involvement of hundreds of thousands of volunteers who participate in the FIRST world community. Every year, each local branch organizes four different technology competitions for kindergarten children and pupils in elementary schools, junior high schools and high schools in many countries, including Israel.