Doctoral student Limor Arbel-Ganon of the Technion has won the first place in the poster competition at the Israeli Society of Physiology and Pharmacology (ISPP). The conference was held in Jerusalem on February 14, 2019. 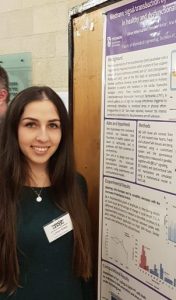 Limor has developed a system to stretch mouse sinoatrial node tissue and measure in parallel the beating rate using advanced imaging techniques. The system was tested on tissue dissected from control mice at different stretch levels. She found that stretching the SAN tissue from healthy mice led to an increase in the beating rate and a decrease in its variability around the mean. To understand the internal mechanisms that connect between the mechanical load and pacemaker function, we simulated the effect of stretch on sinoatrial tissue from a heart disease patient. The research showed that changes in calcium and phosphate signaling are responsible for the rhythm disturbance in unhealthy sinoatrial node tissue and for the increase in beating rate in healthy sinoatrial node tissue.