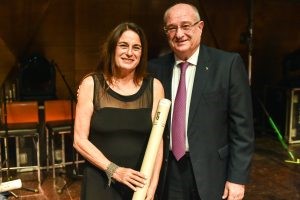 On June 11th 2018, Rona Ramon received an Honorary Fellowship from Technion at the Board of Governors Annual Event. The award was bestowed upon her by Technion President Prof. Peretz Lavie, “In recognition of her public activity in the field of education and the promotion of youth and children in Israel; in acknowledgement of her significant contributions to the Israeli space industry and the encouragement of science and space studies; and in appreciation for her outstanding leadership and dedication to Israeli society and the State of Israel.”

“Rona Ramon was an exceptional woman who left a deep imprint on Israeli society. She founded the Ramon Foundation which aims to ignite the three essential values which Ilan and Asaf Ramon stood for – academic excellence, social leadership, and groundbreaking courage,” said Prof. Peretz Lavie.

Rona lost her beloved husband Colonel Ilan Ramon, a national hero, and first Israeli astronaut, and six years later also grieved the loss of their son, IDF Captain, Asaf Ramon who followed in his father’s footsteps and became a fighter pilot in the IDF.

Rona devoted her time to comforting others in Israel and across the globe, telling Ilan and Asaf’s story and reinforcing the ideals for which they stood.