Researchers from Israel’s Technion have created a new type of optical system. Their “nano-hedgehogs  of light”, also known as optical skyrmions, set the stage for a new platform for information processing, transfer and storage applications. 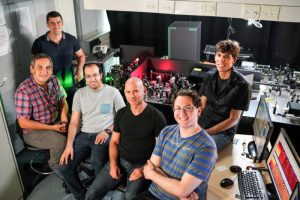 The research, published recently in Science, was led by Professor Guy Bartal of the Viterbi Department of Electrical Engineering and Professor Netanel Lindner of the Physics Department at the Technion. The research team also included Professor Bergin Gjonaj of the Albanian University Faculty of Medicine in Tirana; as well as Shai Tsesses, Evgeni Ostrovsky and Kobi Cohen, all research students at the Technion.

The term “skyrmion” is derived from the name of Dr. Tony Skyrme, an English physicist who, in 1962, discovered that high-energy arrangements of physical systems with fields that have a “hedgehog-like configuration” enjoy an enhanced stability. Over the years, the concept was applied to several material systems, most notably in magnets. Hedgehog arrangements are considered a highly promising alternative for data representation, which could drastically increase computer memory storage.

Currently, most of the world’s information is inserted or extracted on hard drives via a mechanical arm. But information management based on skyrmions only requires weak electrical currents. And skyrmions are of nanoscale dimensions – with diameters 10,000 times smaller than that of a hair strand. Such features are why skyrmions are expected to dramatically optimize, speed up and reduce the costs of information processing, transfer and storage.

The Technion researchers were the first to extend Dr. Skyrme’s idea to the world of optics: they managed to generate skyrmions using the electrical field of electromagnetic waves. In contrast to “regular” light waves, whose electrical fields usually point along a specific direction (a physical principle underlying, for example, polarized sunglasses), the Technion researchers demonstrated that an electric field can take on a “skyrmion” shape and simultaneously face in all directions, such that its spatial configuration looks like the quills of a hedgehog. In addition, they showed that these “light hedgehogs” are robust against various defects in the material hosting the electromagnetic waves.

Successful generation of skrymions in electromagnetic waves may be of critical importance in practical applications. To date, materials in which skrymions are formed are very rare and usually require cooling to very low temperatures, typically achieved with liquid nitrogen or helium. The new discovery by the Technion team could enable future replication of this unique effect in a wide range of systems and materials, including  liquids, nanoparticle systems and even cold atomic gasses. It might also lay the ground for new skyrmion applications in optical (rather than magnetic) information processing, transfer and storage.

The work was supported by the Jacobs Foundation, I-CORE Excellence Center, the Israel Science Foundation (ISF) and the European Research Council (ERC).