A generous donation by the Adelis Foundation has enabled the establishment of the André Deloro Building for Biosciences, Medicine and Engineering

The cornerstone of the André Deloro Building for Biosciences, Medicine and Engineering was recently laid on the Technion campus – a new facility dedicated to interdisciplinary research. The new building will be constructed thanks to a generous donation by the Adelis Foundation, and will serve as a meeting place for scientists, bridging fields that were once researched individually. 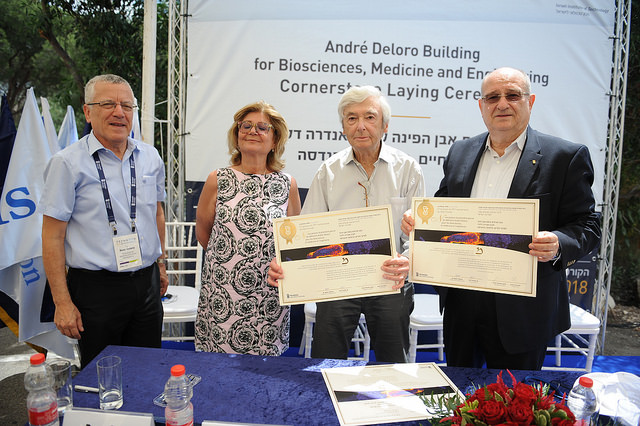 Technion President Prof. Peretz Lavie said that, “André Deloro was a civil engineer who understood the significance of building bridges between different fields of research, between institutions, between people, and between countries. This understanding led to the establishment of the Rappaport Faculty of Medicine in the late 1960s thanks to a prophetic and courageous decision by Technion management. The Faculty’s establishment, just like the building that will be erected here, was based on the understanding that medicine and engineering must go hand in hand.”

“The future of research lies in shattering dogmas and breaking down traditional walls between disciplines,” said Adelis Foundation Trustee Rebecca Boukhris. “The Deloro Building will also have an important social role: making medicine equally accessible to the entire population. We are not only investing money here, but also a great deal of hope, and we have no doubt that Technion will make the best possible use of this investment,” she added.

Technion, the Adelis Foundation and the Deloro family have a longstanding relationship that has generated the establishment of the new interdisciplinary building. The new building will include modern labs and facilities designed for researchers across the Technion, who will work together to advance interdisciplinary research and groundbreaking developments in science and medicine. These developments are expected to affect the lives of millions of people around the world, as Albert Deloro said at the ceremony: “The building will honor the memory of André Deloro in the best possible way – as a home for scientists from different faculties who will work towards a common goal: helping humankind overcome disease. The building will realize André’s vision of a strong Israel open to the world, and will showcase the excellence of Technion’s scientists and their wisdom.”

The Adelis Foundation was established in 2009 by the late André Cohen Deloro in order to support academic excellence in Israel, especially in the fields of scientific and medical research. After André Cohen Deloro passed away, the Foundation management established the Adelis Prize for Brain Research, in accordance with Mr. Deloro’s intellectual legacy and vision. The prize is intended to encourage excellence in the field of brain research in Israel and to translate the research into global impact for the benefit of all humanity. The prize is open to all young Israeli researchers in the field of brain research, and the winner receives a $100,000 research grant.