2017 GRADUATES OF THE JACOBS TECHNION-CORNELL INSTITUTE

Students to Receive Dual Degrees from the Technion and Cornell,

NEW YORK, NY (May 17, 2017): On Tuesday, the Technion-Israel Institute of Technology and Cornell University honored the 2017 graduates of the Joan & Irwin Jacobs Technion-Cornell Institute at Cornell Tech – including the first-ever graduating class of Health Tech students and the second graduating class of Connective Media students. This will be the last class graduating from Cornell Tech’s temporary home in the Google building in Chelsea as the new Cornell Tech campus (home of the Jacobs Technion-Cornell Institute) opens on Roosevelt Island in September. 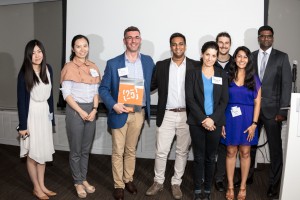 The pre-graduation event in Manhattan recognized the accomplishments of the 27 graduates of this year’s class, 21 of whom will receive Technion-Cornell Dual Master’s Degrees in Connective Media for their studies in the technologies driving digital media (and the social and business forces at play). The other six graduates will receive Dual Master’s Degrees in Health Tech, where students study both health and technology, learning to create applications to promote healthier living for individuals.

“The 2017 graduates of the Jacobs Technion-Cornell Institute now join the ecosystem of New York – a developing ecosystem of technology, entrepreneurship and innovation,” said Prof. Peretz Lavie, President of the Technion Israel-Institute of Technology. “I have been inspired by these students’ work, and I look forward to following their journeys as they launch start-ups, develop game-changing innovations and join some of the world’s leading companies. I know their contributions to societies throughout the world will be immense.”

“The Jacobs Technion-Cornell Institute was created to improve the strength of the New York tech ecosystem while also using deep science thinking to make a difference for real people and improve the common good,” said Ron Brachman, Director of the Jacobs Technion-Cornell Institute at Cornell Tech. “The Connective Media and Health Tech graduates of 2017 truly exemplify this mission, and we could not be more proud of what they have accomplished.”

The Jacobs Technion-Cornell Institute embodies the academic partnership and shared commitment to impact between the Technion and Cornell University. The partnership also brings the Technion’s game-changing brand of science and technology education – and Israeli innovation – to New York.

The Connective Media graduate program, the first degree of its kind in the world, was designed with input from some of the world’s leading technology and media companies, including Twitter, Facebook and The New York Times. Its hands-on, two-year curriculum is centered on computer science and engineering, the human and social impacts of technology, and entrepreneurship.

“I chose to come to Cornell Tech because I wanted to learn how to create technology that makes an impact on the world, and I chose the Connective Media program in the Jacobs Technion-Cornell Institute because I wanted to make sure that impact is a positive one,” said Harrison Gregg, Connective Media ’17. “The Jacobs Institute, at the intersection of academia and industry, offers the best of both worlds – giving us, as students, the freedom to develop ideas for making the world a better place and the power to make them happen.”

The Health Tech graduate program, on the cutting edge of transforming how healthcare is delivered and experienced, was designed with input from leading hospitals, insurance companies, medical schools and health organizations. Its rigorous, interdisciplinary curriculum combines exceptional technical education with the industry-specific knowledge needed to develop innovative new products and services that address real healthcare needs.

“What you’re doing in the real world after you graduate, you actually practice everyday at the Jacobs Technion-Cornell Institute,” said Sonia Sen, Health Tech ’17. “There’s no other program where you’re continuously building products and finding solutions through technology for the people that need them the most.”

The Jacobs Technion-Cornell Institute was established in 2013 with a $133 million gift from Dr. Irwin Mark Jacobs, founding chairman and CEO emeritus of Qualcomm, and his wife, Joan Klein Jacobs. It has quickly become a catalyst for global entrepreneurship and a driver of New York’s emerging tech ecosystem and local economy. The Jacobs Institute combines professors, research and resources from the Technion, a leading global research university, that was a vital factor in Israel’s emergence as the “Startup Nation,” and Cornell University, a longtime leader in engineering and computer science, with a strong presence in New York City. The Jacobs Institute’s dual-degree program — accredited through the Technion in Israel and Cornell in the U.S. — provides graduates with an international advantage and greater recognition in an increasingly global workforce.