An Israeli – Japanese conference on regenerative medicine and medical uses of stem cells was held at the Technion on Tuesday, March 14th.  The conference took place in the Rappaport Faculty of Medicine and was aimed at strengthening the relations between the Technion and Kyoto University. 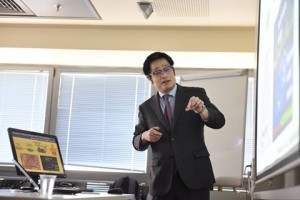 Professor Kenji Osafune from the CiRA Center of Kyoto University.

More than a quarter of a million people in Japan are currently on dialysis, and the total cost of treating chronic kidney diseases in Japan amounts to 13 million dollars annually. Professor Osafune is therefore developing methods for growing tissues from pluripotent stem cells, or hiPSCs.  This approach involves the production of mature tissues from embryonic stem cells derived from available mature cells in the patient’s body such as skin cells.  In other words, cells that are taken from the patient’s body are transformed into embryonic stem cells that can potentially transdifferentiate into any type of tissue.  Professor Osafune is transforming these cells into kidney cells that can be transplanted.  Since the donor and recipient are the same person, this approach does not result in rejection of the cells.  Professor Osafune explained:  “We can currently produce a few cells, and soon we will be able to produce tissue.  My dream is to produce in the laboratory an entire kidney that can be transplanted.”

Professor Lior Gepstein of the Technion explained that the Technion is a leader in research in the field of hiPSCs, and that this area could provide common ground for ties with Kyoto University. Professor Gepstein, a faculty member of the Rappaport Faculty of Medicine in the Technion and Director of the Cardiology Department at Rambam Health Care Campus, presented before Professor Osafune and the other conference participants the latest developments from his laboratory in the field of cardiac rehabilitation. His work is also based on the hiPSCs approach in which body cells are transformed into embryonic stem cells from which heart cells are produced.

The heart is an organ in which cells do not regenerate if the heart is damaged, and an incident such as a myocardial infarction is liable to destroy a billion cells – a quarter of the heart’s total cell population.  Most of the technologies that Professor Gepstein is developing are based upon the following process: Available cells, such as skin cells, are taken from the patient. These cells are transformed in the laboratory into unique stem cells known as induced stem cells. These cells are used to produce the designated heart cells that are required (myocardial cells, pacemaker cells etc.), which are then transplanted in the patient’s heart.  Since these heart cells come from the patient, the method eliminates the problem of organ rejection that is characteristic of transplants.  Professor Gepstein has successfully demonstrated this technique in several channels, including transplanting pacemaker cells in patients suffering from cardiac arrhythmias and transplanting atrial tissue to treat patients with ventricular fibrillation. This approach, which is based on research that earned the Japanese researcher Shinya Yamanaka a Nobel Prize, holds immense potential from the standpoint of treatment as well as cardiac research.  One of the latest developments in Gepstein’s laboratory is synchronization of cardiac rhythm using light to control cardiac cells (optogenetics).