Assistant Professor Daphne Weihs from the Technion Faculty of Biomedical Engineering has developed a method for estimating the metastatic potential of tumors. Since 90% of cancer deaths are due to metastases,  their early prediction can improve the patient’s chances of survival

A research approach developed at the Technion will allow early and rapid prediction of metastasis formation. This information will enable physicians to treat these metastases in their early stages of formation, thereby improving the patient’s chances of survival. 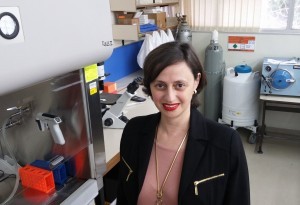 The aforementioned approach, which was first presented in 2013 and whose development has continued in several directions since then, is presented in three papers published recently by Assistant Professor Daphne Weihs from the Technion Faculty of Biomedical Engineering. Professor Weihs, head of the Mechanobiology of Cancer and Wounds Lab, is studying the mechanical forces exerted on the body tissues by metastatic cells – cells with high metastatic potential that are highly invasiveness. The study was conducted using synthetic gel surfaces produced in Professor Weihs’s lab, which simulate the rigidity of soft tissues in the body. The goal: to quantify the metastatic potential and metastatic risk of cancer cells using the mechanical interactions of the cells with the gel to rapidly. Lab experiments test the forces that such cells exert on these synthetic surfaces to indent and penetrate them.

Contrary to the treatment of primary tumors, which is now performed very efficiently, the treatment of metastases is complex and challenging. These metastases are sent to healthy organs via the lymphatic system and blood vessels, and it is difficult to identify them in their initial stages of development. When they are identified, usually at the point where they are already large and diffuse, medical treatment is very complicated. This is why metastases are responsible for 90% of cancer deaths.

In recent decades, various methods for identifying the metastatic potential of cells have been developed, based primarily on genetic and biological markers. The disadvantage of these measures is that they are expensive, take a long time and are not applicable to cancers such as pancreatic cancer, for which identifying markers have not yet been determined. In fact, up to now, no method has been presented that is effective, precise and general enough for quantifying the metastatic potential, an essential step towards predicting the formation of metastases.

In her research, Professor Weihs found that changes in the cell’s structure and its ability to exert a mechanical force may provide this essential information in a precise and quantitative way. This method, which is independent of the specific genetics of the tumor, enables measurement that is rapid (within a hew hours) and customized to the patient.

The synthetic gel surfaces produced at Professor Weihs’s lab  have stiffness that is similar to soft tissuesstiffness, and therefore they can be used to study the conditions under which cells exert force on the tissue that they attempt to penetrate. This method makes it possible to quantify the degree of force that they exert, the resulting penetration depths, and the difference in the behavior of different types of cells. “The cancer cell strives to penetrate normal tissue and take over the space inside it,” explains Assistant Professor Weihs, “so the cancer cells adapt and develop structural flexibility that enables them to soften or stiffen in order to squeeze or push through narrow areas.”

Based on the characteristics and structure of the healthy tissue, the cancer cells alter their own features, changing shape, internal structure and structural rigidity. “It is interesting to note that under certain conditions the secret of cancer cells is not hardness but rather softness – cancer cells are softer and more flexible than healthy cells, and metastatic cells are even softer and more flexible. In many cases, however, the cells need to apply force to push their way through. Cancer cells adapt to changing environments quickly, and our method is based on identifying changes in them.”

The first of the three papers was published in the journal Biomechanics and Modeling in Mechanobiology and is based on the research thesis of master’s student Sonbula Massalha. This study focused on cells that anchor themselves to their environment, but do not try to penetrate the synthetic gels produced in the lab. Massalha and Weihs observed a difference between benign and cancerous breast cells, where the latter exert greater force on the gel even though they do not try to penetrate it. These cells, although they are not yet invasive at that stage, affect the surrounding cells and can improve their ability to penetrate and invade. The phenomenon of synergy between neighboring cells is demonstrated in another paper.

The second paper was published in the journal Tissue Engineering, together with postdoc Dr. Martha Alvarez-Elizondo. This study focuses on the connection between the cell’s migratory capability and their mechanical invasiveness, which is measured in the laboratory on the gels. Principal findings: strong and aggressive is also the fastest moving. Cells belonging to sub-populations that are more capable of rapid migration are also the ones that exert more force in an attempt to penetrate the tissue or the gel. In this study Professor Weihs’s lab found that the mechanical testing method that they had developed is far more efficient and economical than conventional methods for testing these characteristics, and provides an assessment of the cells’ characteristics within a few hours.

For the third paper, published in the journal Annals of Biomedical Engineering, Prof. Weihs and doctoral student Yulia Merkher evaluated group invasion processes, which are more similar to those occurring in the body. In this study, the researchers found that cells become stronger and more invasive when they are in spatial proximity to each other, and the explanation is simple: cells that work together exert enhanced joint pressure on the tissue or aid each other in force application, thereby increasing their chances of penetrating tissue. Professor Weihs said: “With this discovery, we intend to go further and develop a tool for rapid and quantitative prediction of metastasis based on this group forcefulness allowing increased invasiveness, measurabkle using the gels, and on movement of cells in a group.”

Cancer cells, it turns out, create a different interaction with the tissue. Not only is the vertical force that they exert on it stronger, but even the adherence preceding the penetration attempts is carried out with greater force and with increased cell motility. “The cancer cell remains round, with a small area of contact, while benign cells become elongated and increase the area of contact with the tissue. It can be said that benign cells are busy solely with adherence and normal function, while a cell with metastatic potential is focused on changes in itself and its environment that will allow it to penetrate the tissue. To do so, the metastatic cell organizes itself very differently in terms of structure, and communicates in a mechanically different way with the other cells in its vicinity and with its environment. These are the clues that may help us identify such cells earlier and faster, on the basis of their mechanical characteristics. These abilities are obviously caused by genetic changes, but with the approach that we have developed, there is no need for information about the specific genetic changes.”

Currently, based on approval by the Ethics Committee that was obtained in 2015, Professor Weihs is evaluating the approach developed at her lab on tumors (not metastases) removed from patients with breast cancer, pancreatic cancer and gastric cancer, as well as tumors from patients with Ewing’s sarcoma, which is characteristic of children and adolescents. Professor Weihs explains that the study utilizes the “remains” of tumor tissues that are not needed, not even for pathology examination. “Based on the initial findings, it seems that we really are able to identify the sub-populations of metastatic cells in different cancers according to their mechanical features. Our practical goal is to develop a system which, during a biopsy or surgery, will enable the medical team to evaluate the likelihood of the presence of tumor metastases in other organs, and to estimate which organs are involved. As stated, this is a very quick test, such that within two or three hours the doctors will be able to assess the metastatic risk of the tumor and adjust the continued treatment accordingly.”

Assistant Professor Daphne Weihs earned her three degrees at the Technion Faculty of Chemical Engineering. She then did her postdoc at the Department of Pathology at the David Geffen School of Medicine at the University of California, Los Angeles (UCLA). In her postdoc, which was financed by NASA because of its implications for biology and medicine in space conditions, she began to study her current subject: cell mechanics, with an emphasis on cancer cell behavior. She was on the list of Israel’s 50 most influential women in 2015, published by the newspaper Lady Globes, thanks to her discoveries in the diagnosis of tumor metastasis, which represent a “breakthrough that will save lives in the future.”