New discoveries about the development of the frontal midline around which the heart, lungs and digestive system are formed are being published in the journal Developmental Cell. The study was carried out by Professor Tom Schultheiss and doctoral student Alaa Arraf from the Technion’s Rappaport Faculty of Medicine

Building the ventral midline. The midline is marked by the matrix protein laminin (red staining, white arrow). Cells (marked in green) migrate towards the midline but do not cross it

A study at the Technion’s Rappaport Faculty of Medicine sheds light on the formation of the front of the body during embryonic development. In the study, published in the journal Developmental Cell, Professor Tom Schultheiss and doctoral student Alaa Arraf examined the factors responsible for the development of the frontal (abdominal) midline concurrently with the dorsal (rear) midline.

According to Professor Schultheiss, “in contrast to the dorsal midline and spinal column, whose aspects have been studied extensively, the process of development of the frontal midline is not clear. This is despite the importance of this line, on and around which the heart, navel, genitals, aorta, digestive system, sternum, bladder, liver, pancreas, lungs and more are formed. 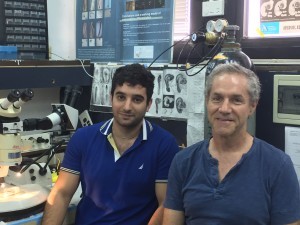 In the current study, the researchers examined the cellular and molecular mechanisms responsible for the formation of the frontal midline in the early stages of embryonic development. One of the key factors controlling this process is the BMP (Bone Morphogentic Protein) gene. Arraf says: “It turns out that control of BMP from a central source (the notochord) enables precise coordination and timing in the formation of the frontal midline. Unbalanced expression of BMP will result in the shifting of the frontal midline, which can cause subsequent problems in the development of the internal organs in the abdomen and thorax.

The study published in Developmental Cell was carried out in conjunction with Andreas Kispert from the Institute of Molecular Biology at Hannover Medical School in Germany.

Professor Schultheiss’s lab is studying embryonic development, with an emphasis on the body’s initial organization and organ formation. “The practical purpose of these fields is to create tissue in the lab that can be used to repair damaged organs,” explains Professor Schultheiss.” To do this we must have a thorough understanding of tissue formation during the natural process of embryonic development. Therefore, we are investigating the formation of organs in the earliest stages, in which the embryonic cells acquire specific properties that are suitable for the target tissue (bone, skin, etc.), as well as the next stages in which the various cellular components combine to form a functioning organ.”