Prof. Yonina Eldar’s lab at the Technion Faculty of Electrical Engineering is developing a minute and efficient innovative ultrasound system that transmits scans to the treating physician immediately. With such a system, ultrasound scans can be performed in disaster areas, in the case of road accidents in developing countries with limited medical infrastructure, and the team at the site can be given medical instructions based on the findings.

Prof. Yonina Eldar’s lab at the Technion Faculty of Electrical Engineering has developed a new approach to ultrasound examinations. The lab has developed an advanced probe that eliminates the need for the large ultrasound devices that we know from clinics and hospitals. The probe acquires only the relevant data, which is transmitted to a remote processing unit or cloud. The resulting image is then transferred to the treating physician’s smartphone (or tablet). Dr. Shai Tejman-Yarden, a cardiologist at Sheba Medical Center, explains that in the case of injuries, for example, “The development will provide a doctor who is not at the scene with information in real time, enabling him to instruct the paramedic at the scene. This development will also enable remote treatment for patients in developing countries, under the guidance of Israeli doctors.” 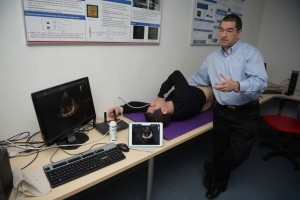 2.Cardiologist Dr. Shai Tejman-Yarden demonstrating the use of the system on student Regev Cohen

Ultrasound  imaging is one of the world’s most common medical tests. Its advantages: it is non-invasive, does not involve exposure to ionizing radiation, is risk-free and relatively inexpensive. Ultrasound is based on high-frequency sound waves that we cannot hear. During the examination, a probe that transmits sound waves is placed against the patient’s body, and an image of the organs being scanned is created based on the pattern of the waves reflected back to the probe. This technology is used in a wide variety of important medical tests: assessing the condition of the fetus in utero, examining the baby’s brain through the fontanel (the gap between the bones of the skull), diagnosing conditions of the internal organs, evaluating blood flow, diagnosing thyroid problems, cardiac examinations, detecting tumors and infections, and more.

At present, ultrasound examinations are performed at clinics and hospitals using a probe connected to a large, cumbersome and expensive ultrasound device. The results of the scan are collected in the computer and interpreted by a radiologist, who sends the diagnosis to the patient’s doctor (generally the family doctor). This process takes several days, which could be critical in some cases. 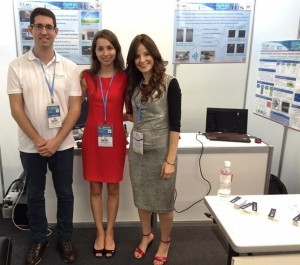 Uploading the scan results to a cloud and enabling the patient’s doctor to view the findings on his mobile device could save time, but until now this has been avoided due to the large quantity of data acquired in each ultrasound scan. In addition, because of the device’s high data acquisition rate, the probe must be connected to it by means of a thick, heavy cable.

The good news is that the SAMPL Lab at the Technion Faculty of Electrical Engineering, headed by Prof. Yonina Eldar, has developed a system that dramatically changes the nature of ultrasound examinations.  First, with the new algorithm developed at the lab, the data can be reduced at the initial scanning stage, so that it can be uploaded to a cloud without harming image quality and without loss of data on the way. Second, the innovative probe developed at the lab eliminates the need for the large ultrasound devices currently used at most clinics.

Prof. Yonina Eldar’s lab is dedicated mainly to developing innovative data processing methods using only a small portion of the data sampled. Reducing the quantity of data sampled has very dramatic positive implications: shortening the data acquisition and processing time, miniaturizing the systems and accelerating their operation, reducing power consumption and saving money. The idea here is of course finding ways to reconstruct the preliminary data even though it is not transferred in full in this process. This is what the researchers at the lab are working on, and now, as stated, they have recorded a dramatic achievement in the field of ultrasound imaging.