The 80th annual meeting of The Israel Chemical Society (ICS) was held last week in Tel aviv. The meeting was attended by a delegation of senior researchers from Stanford University, including two Nobel laureates for chemistry: Prof. Michael Levitt, who was awarded the prize in 2013 (for developing computerized models for understanding the structure and properties of complex chemical systems), and Prof. William Moerner, who received the prize in 2014 (for developments in fluorescence microscopy). This year’s meeting was organized by the Schulich Faculty of Chemistry at the Technion, and ICS President, Prof. Ehud Keinan, is a member of this faculty. 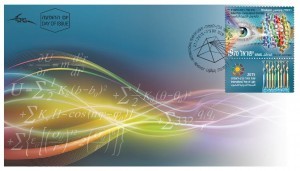 The meeting opened with the introduction of a new stamp, dedicated to the International Year of Light declared by the UN, and to the three 2013 Nobel Prize laureates in chemistry – Arieh Warshel, Martin Karplus and Michael Levitt, who was the keynote speaker at the opening plenary session. U.S. Ambassador to Israel, Daniel Shapiro, commented that “the Israeli success story is based on science, and the ICS played a major role in building that success even before the establishment of the state. And even though the Israeli and U.S. governments help to oil the wheels, the main force behind the science cooperation between the two countries is based primarily on the activities of the ICS and its American counterpart, which work to promote excellence in academia, by creating an environment that promotes innovation and by being willing to take risks and raise new ideas.” Throughout the first day, the ICS awarded many prizes, including the prestigious 2014 Tenne Family Prize in memory of Lea Tenne for Nanoscale Sciences, awarded to Prof. Efrat Lifshitz, a senior member of the Schulich Faculty of Chemistry, for “development and application of advanced methodologies for the study of the properties of nano-scale materials. These interdisciplinary achievements have significantly impacted the field of semiconductor nanostructures and gained worldwide attention.” Roman Waxenberg, a student of Prof. Lifshitz, won the Excellent Graduate Student Prize. 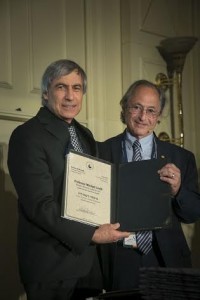 In his opening address, Michael Levitt related that his passion for chemistry was ignited when he watched “Thread of Life” starring Prof. John Kendrew, a BBC series broadcast in black-and-white in the early 1960s. “When I grew up, I chose to study physics, because to me it seemed simpler than chemistry – ‘just a few equations’ – but in the end I found my way to chemistry and medical applications.”

Levitt earned his M.A. and conducted post-doctoral research with Prof. Shneior Lifson at Weizmann Institute, “which is largely responsible for our winning the Nobel Prize.” During his stay in Israel Levitt fell in love with an Israeli and married her, and his first doctoral student (Miri Hirshberg) was also Israeli. “I’m very excited to be here,” said Levitt, “and would like to take this opportunity to thank the Nobel Prize committee for choosing us – not for the fact that they selected us, but rather for the courage to recognize the importance of the method – a calculation method that contributed significantly to biology and medicine. Ultimately, the big winner is our field of research.

“My career developed during a period of immense changes in science, which was driven by technology. It is hard to imagine the immensity of the change that has occurred in the world of computers within a few decades. In 1967 we were working on a computer with 1 megabyte of memory, which cost $1 million and took up an entire room; today you can buy a small laptop with 10 gigabytes of memory for a few thousand dollars. If similar changes had taken place in the automotive field, we would be able to buy a Volvo for $3 that would carry 50,000 passengers, travel at a million kilometers an hour, and park in a shoebox.”

At the end of his address, Levitt advised the young scientists in the room be daring (“take risks, but not stupid ones”), to follow their passion and be original, consistent, good and generous.