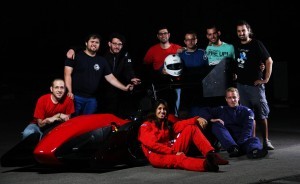 The Technion delegation to the International Formula Student Race returned to Israel last week after winning a special prize, awarded to them by the chief designer of the Fiat Group (Alpha Romeo, Maserati and Ferrari), for the best design and for showing the greatest improvement since the previous competition. In the overall rankings, the team came in 28th place out of 44.

The leaders of the team, which consists of some 40 students from different Technion faculties, are Doris Pitilon and Ahmad Omri.

Doris, who was born in the US and grew up in Holon, completed her undergraduate degree in mechanical engineering this summer within the Academic Reserves/Atuda framework (a program which enables youngsters who are intended to join the army as soldiers, to study academic studies prior to their military service); she will shortly be called up to the IDF’s Ordnance Corps.

Ahmad, who grew up in Germany and in Sandala Village near Afula, completed his undergraduate degree at the Technion through the NAM (an acronym in Hebrew for Outstanding Arab Youth) Program and is currently pursuing his master’s degree in mechanical engineering. Members on the student formula team emphasized the tremendous contribution of Prof. Reuven Katz’s, Head of the Center for Manufacturing Systems and Robotics at the Faculty of Mechnical Engineering, who helped them with the fundraising efforts of the project, supplied them with a lab to work in, and incorporated this program into the annual course under his guidance: “New Product Design.” 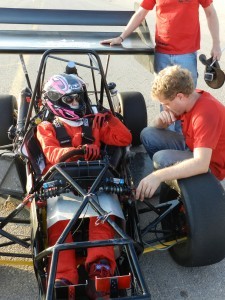 The Group’s activity was funded in part by the Grand Technion Energy Studies Program (GTEP).

“The minute I heard about this project I wanted to be a part of it,” said Michael Kootzenko, a student from the Faculty of Aerospace, who was in charge of the car’s exterior surface; Kootzenko also drove the car in the competition. “Constructing the car for me was the fulfillment of a childhood dream. We built a car that was much stronger than what was required, and I’m extremely proud of the outcome.”

“I was attracted to this project because I wanted to do something practical during my studies,” adds Doris Pitilon, “And constructing the car is mechanical engineering at its best. It has been the main thing on my mind over these past two years, and what I gained in terms of management and engineering I would never have learned anywhere else. The competition itself was an amazing experience. Teams came from all over the world to compete. We all camped out together near the racetrack, and the atmosphere was truly great.”

The competition included a review of engineering aspects (“the immobile part of the competition”), followed by the various examinations evaluating acceleration, speed and performance. “We learned from our mistakes last year and came to this year’s competition well prepared with a stronger and faster car. We excelled in the acceleration heat (75m in 4.3 seconds), and also in the endurance heat.”

The Technion race car had four drivers from the team: Doris, Michael, Gilad Agam and David Amarilio. Over the past year, the drivers trained at “Dan Karting” in Haifa, where they were provided with access to a simulator and training free of charge. Other donors included Kanfit Ltd., which supplied the carbon composite materials for the car’s body, and “Plasko” that transported the car to and from Italy. Presently, the team is working on formulating the 2015 student formula team, which will represent the Technion in next year’s competition.

See how the team prepares for the championship race:

The SAE International has been organizing international events and competitions for engineering students for over thirty years. Its most prestigious competition is the Formula Student SAE Championship, in which students are required to design and manufacture a race car.