Neural cells grown on laboratory plates (two-dimensional neural cultures) constitute a convenient model for many studies in the field of neuroscience and medicine. Their main advantage is the relative simplicity by which they can be used to examine physiological changes in neural cells’ activity patterns caused by changes in their environment. However, the shortcomings of these simple 2D cultures is that they contain only a single layer of cells, and do not exhibit the complex three-dimensional network connectivity found in real brains. Previous attempts to develop 3D models for studying the central nervous system have met with limited success, mainly due to the high complexity of developing a 3D culture capable of simulating brain tissue as well as challenges associated with developing methods for observing network activity in three dimensions. Technion researchers led by Professor Shy Shoham from the Department of Biomedical Engineering now report in Nature Communications that they were able to develop, for the first time, three dimensional cell networks that can simulate complex aspects of brain activity, which could provide a better access for understanding the physiology of the central nervous system. 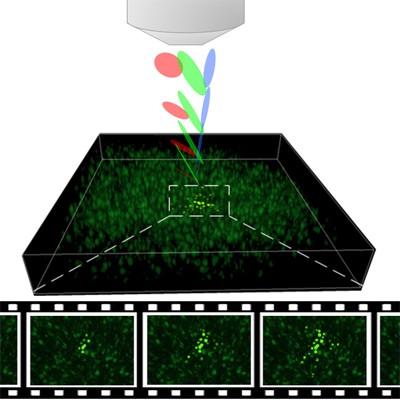 The Editors of Nature Communications note that three-dimensional neural networks represent a promising model of complex neural tissue, which may lead to a better understanding of the structure and function of the brain, and that the Technion researchers also present an advanced method for viewing the neural activity of the engineered culture using a fast microscopy system they developed.

Prof. Shoham and his research team, which included Dr. Hod Dana, Dr. Anat Marom, Shir Paluch, Roman Dvorkin and Dr. Inbar Brosh, explain that they grew the advanced culture in a clear gel that supports cellular growth and allows the cells to bind and form neural networks. “By optimizing the culturing conditions we achieved cellular density and composition similar to those found in the human brain, and were able to demonstrate the formation of connections between cells and of networks that maintain neural activity,” says Dr. Marom. To enable the study of network activity in 3D, optical tools were used: nerve cells in the cultures were genetically altered making it possible to view ongoing network activity through a fluorescence microscope, earning them the nickname “Optonets”.

To view cell activity in 3-D, the researchers developed an advanced imaging system that uses ‘temporal focusing’– a non-linear optical technique developed nearly a decade ago at the Weizmann Institute of Science. “The hybrid SLITE imaging system we developed is a significant step forward in improving research capabilities for viewing the activities of multiple brain cells in space and time through which we may be able to reach insights about brain activity,” explains Dr. Dana.

“Through complementary advances in microscopy and in neural tissue engineering we demonstrated an unprecedented ability to view more than a thousand cells within developing neural networks, exhibiting complex spontaneous activity patterns. These innovations open new windows of opportunity for further developments in the field of neural interfaces and other applications for 3-D engineered networks, ranging from basic brain research to the examination of the impact of neurological drugs on nerve cell activity”, summarizes Prof. Shoham.