Ishai Zimerman and his son-in-law Ronen Atzili are the 2014 Technobrain first prize winners for building a device that successfully climbed up a steep cable at a high speed while being powered by an electric screwdriver. They will be awarded a 10,000 NIS cash prize.

At this year’s competition, Technobrain competitors were required to build a device that could climb up to a height of 25 meters in a nearly vertical manner, and then slide down from this height while lifting a “space elevator” suspended from the other side of the cable. This challenge was made further difficult because of the provision prohibiting the use of combustion or open flame energy sources of any kind.

This is the third time that Zimerman is competing in Technobrain, and Atzili’s second time. “My granddaughter was surfing the net one day and saw an advertisement for the completion and, she thought it would interest me, knowing of my sportive and creative spirit,” related Zimerman, who operates a locksmith’s workshop in Kibbutz Ein Harod and is in his 80’s. 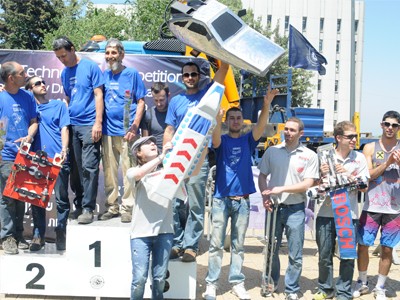 “The idea of basing the engine on an electric screwdriver we borrowed from the world of manufacturing plastic pipes using plastic extrusion, in which raw plastic material is melted and formed into a continuous profile,” said Atzili. “In short, it’s an idea that came to me originating from my experiences working in the plastics industry.”

Do you have plans for what to do with the prize money?

The Technobrain Competition is in memory of Neev-Ya Durban, who was an outstanding Technion graduate, and is funded by Dr. Robert Shillman (who everyone knows as “Dr. Bob”), who did his graduate work at the Technion.

The engineer Yuri Artsutanov who developed the concept of the “space elevator” was the guest of honor and one of the judges of the competition. He published his idea, which was based on the proposal by Konstantin Tsiolkovsky, in the 1950’s. Artsutanov’s visit to the Technion was supported through the Dean of Students Office, the Asher Space Research Institute (ASRI), and the foundation founded by family members of Norman and Helen Asher from Chicago. This was his first trip to Israel. “The competition was very fun and entertaining,” he said.