Technion researchers have discovered that multidrug resistant cancer cells frequently produce a large number of lysosomes. Taking advantage of this unique feature of the production of multiple lysosomes and the dramatic irreversible accumulation of certain lipid-soluble drugs bearing light-sensitive properties in these lysosomes– a “Pharmacological Trojan Horse” has been developed  that results in the destruction of drug resistant cancer cells.

For this groundbreaking research achievement, Professor Yehuda Assaraf, the Dean of the Faculty of Biology, will be awarded the Hilda and Hershel Rich Innovation and Entrepreneurship award in June 2014. This innovative new technology has been registered as an American patent, and has stirred a great deal of interest among major international pharmaceutical companies. Its potential therapeutic approach was published in the journal “Cell Death and Disease” and received wide coverage in a “Spotlight of Cell Press” article. 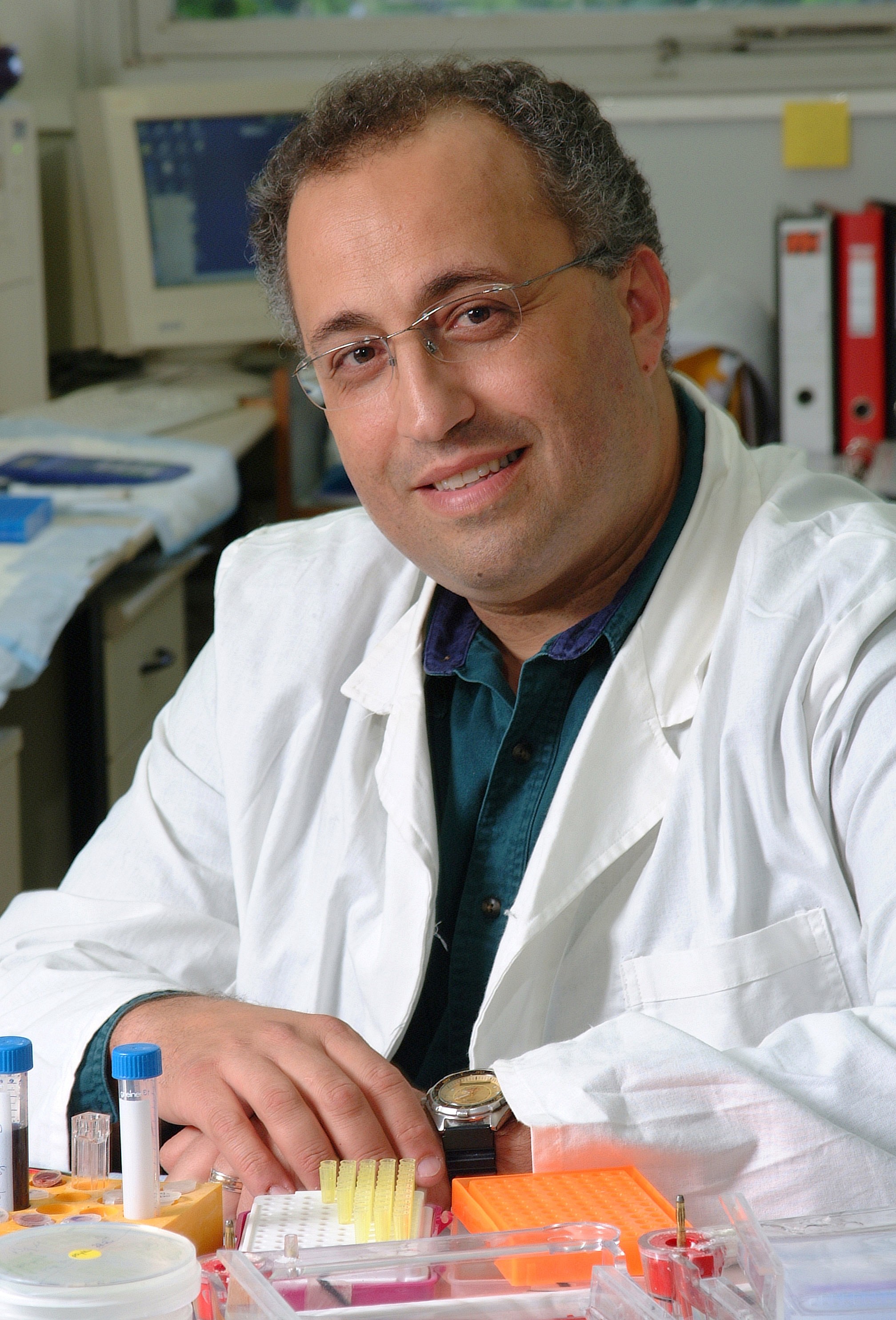 “Cancer cells acquire a wide range of sophisticated mechanisms to overcome cytotoxic drug therapy (i.e. chemotherapy) directed against them,” explains Professor Assaraf. “This phenomenon, known as ‘multidrug resistance’ (MDR) often stems from the fact that cancer cells possess an abundance of pump proteins, located in the membrane of cancer cells, that act as efficient pumps which expel a multitude of anticancer drugs from the cancer cells. This is an important mechanism by which malignant tumors become resistant to chemotherapy.”

Two types of MDR are known– inherent drug resistance that exists prior to drug therapy as well as acquired drug resistance that is provoked by drug treatment. Therefore, Professor Assaraf and members in his research team, including Dr. Michal Stark, Dr. Eran Bram and Yamit Adar, made it their primary goal to develop innovative therapeutic strategies in order to overcome the MDR phenomenon, which is a major hindrance to the development of curative drug therapies of cancer.

The researchers searched for the “Heel of Achilles” of MDR cancer cells which would constitute the weakest point through which these chemoresistant cancer cells could be defeated. They discovered that MDR cancer cells often contain a large number of microscopic intracellular organelles called lysosomes. Lysosomes were first discovered in 1974 by Nobel Laureate, Professor Christian de Duve. Lysosomes are intracellular acidic vesicles that contain dozens of hydrolytic enzymes capable of breaking down virtually all kinds of cell components, including proteins, fats, sugars, DNA and RNA. The role of lysosomes is to break down these cell components and other cells that have reached their end, to safeguard the proper physiological functioning of body cells.

The researchers discovered that light-sensitive, lipid-soluble drugs bearing weak basic features, selectively concentrate to very high levels within the multiple lysosomes present in MDR cancer cells. “MDR cancer cells are frequently equipped with two complementary defense systems,” explains Professor Assaraf. “One is the drug extrusion pump proteins located in the cell membrane that efficiently expels different anticancer drugs. The other is the multiplication of lysosomes; many anticancer drugs are lipid-soluble drugs with attributes bearing weak basic features. In other words, in an acidic environment such as inside lysosomes, these drugs become positively charged, get irreversible captured by lysosomes and accumulate to very high concentrations. Drugs capable of escaping one of the “guardians”- that is – the pumps that expel anticancer drugs, will be efficiently “vacuum-cleaned” by the numerous lysosomes found in the resistant cells and thereby prevent the drug from damaging its targeted site in the cancerous cell, resulting in high drug resistance.”

“We took advantage of this unique feature as an “Achilles Heel” and devised a “Pharmacological Trojan Horse” to kill MDR cancer cells,” explains Professor Assaraf. “When we illuminated light upon the MDR cells containing the light-sensitive drugs trapped in the lysosomes, it created oxygen free radicals that destroyed the lysosome membrane and as a result, all of the contents of the lysosomes was spilled into the cancerous cell. This resulted in a massive release of the above enzymes, and rapid digestion and destruction of MDR cancer cells.”

In collaborative efforts with other researchers, among them Professor Grifﬁoen, Dr. Nowak-Sliwinska, Professor van den Bergh, Professor Skladanowski, and Professor Sarna from Holland, Switzerland and Poland, it turned out that in live model experiments using multidrug resistant tumors of human ovarian cancer origin, the core of the tumor was destroyed upon exposure to light, after having accumulated vast amounts of anticancer drugs inside the lysosomes. Moreover, due to the free oxygen radicals that were created after light exposure, the blood vessels nourishing the tumor were destroyed and others were occluded (i.e. blocked). As a result, the blood supply to the remaining cells in the malignant tumor was cut off, and this led to the destruction of any malignant cells that remained.

Professor Assaraf and his research team are diligently working towards developing a second generation of “Pharmaceutical Trojan Horse” selectively targeting cancer cells only by homing protein receptors that are selectively present on the malignant cells without harming healthy body cells. These receptors will deliver the “Pharmacological Trojan Horse” into the lysosomes, which will then be activated by light irradiation from optic fibers. This and much more – the researchers are also developing an alternative “Trojan Horse” that will be activated by ultrasonic waves that would be possible to target any cancerous tissue or metastasis of cancerous cells in a patient’s body without using any invasive procedure.

However, Professor Assaraf emphasizes that the way to develop a “Pharmacological Trojan Horse” for the practical treatment of malignant tumors in humans is still a long way off. 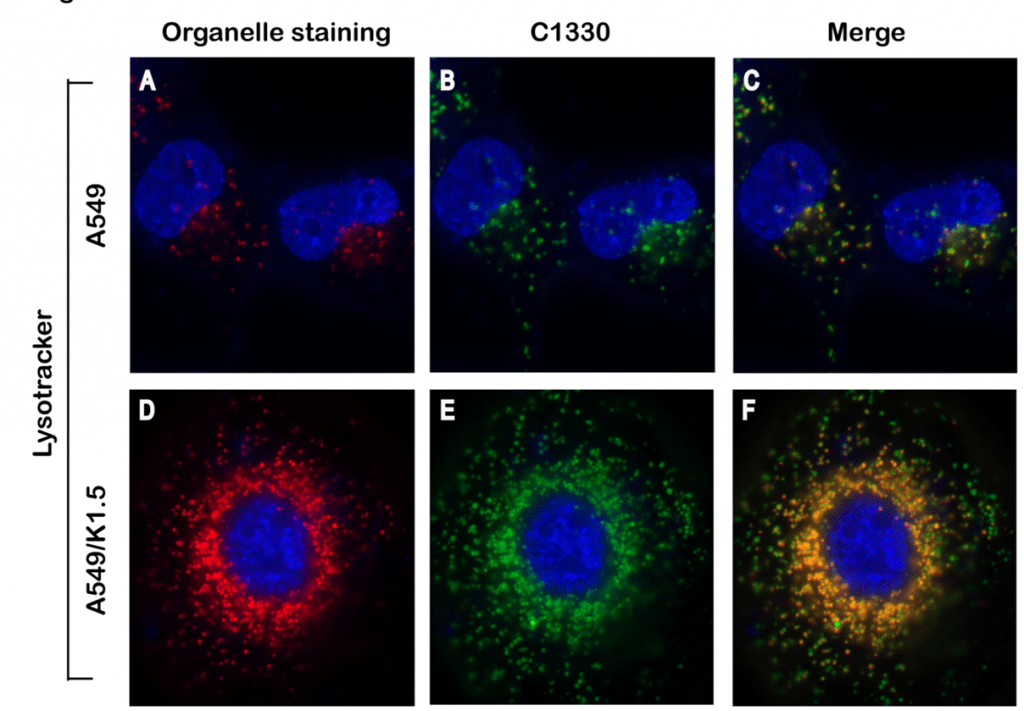 In the image: MDR lung cancer cells containing large amounts of lysosomes (vesicles marked in red) shown on the bottom line of resistant cells as compared with the top line showing sensitive cancer cells with small amounts of intracellular lysosomes). The green fluorescent drugs which are sensitive to light accumulate to very high concentrations in the multiple lysosomes in multidrug resistant tumor cells (the vesicles marked in green) and after exposure to light the multiple lysosomes explode due to the abrupt formation of oxygen free radicals, and the lysosomes enzymes become released into the cells, hence digesting the contents of the cancer cells and killing them.