Within eight years: Student dropout rates have significantly decreased among the Arab population at the Technion – only 12% in comparison with 73%.

A significant decrease in the number of student dropouts of Arab descent has been registered at the Technion. Within eight years the percentage went down from 73 to 12. This is what was mentioned at the inauguration of a new program for outstanding students – a first of its kind in Israel.

The Assistant to the Senior Vice President for Minorities, Professor Yosef Jabareen, said that the program was built after it became apparent that Technion activities to lessen the dropout rate of Arab students was successful, and when the percentage of Arab students at the Technion reached the percentage of the general Arab population in Israel. For the time being, it has been decided that this will be an annual program for Arab students who excel in their studies, with the aim to: encourage them to continue on to graduate studies and to provide them with assistance in integrating into the Israeli labor market. 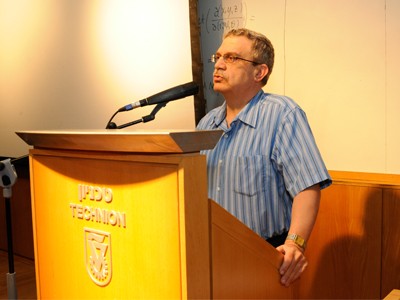 “When I completed my undergraduate studies at the Faculty of Mechanical Engineering at the Technion, it took me a year to find a job,” related Professor Jabareen to the outstanding students in the audience. “Finally, I found a job as a security guard at the Holon Cemetery. I decided to continue my education and today I’m a faculty member at the Technion.  I believe that you can do it, too!”

A poll conducted among outstanding Arab students revealed that about 56% of them would like to continue on to graduate school. Most of them want to get a better understand of the business world and expressed interest in entrepreneurship. Many also wanted to improve their command of English and Hebrew.

The new program, “Generous Hands” (in Hebrew Yad Nadiv) was designed in accordance with the survey findings, and in collaboration with the Budget and Planning Committee (PBC) sub-committee of the Council for Higher Education. Outstanding students will participate in special workshops, be sent on tours of leading laboratories abroad, and will be given scholarships. A special grant will be given to lecturers that will accompany them.

Professor Hossam Haick from the Faculty of Chemical Engineering told students that,  “For many years the Arab community concerned itself with survival, since we didn’t have a lot of opportunities. Today we understand that excellence is the key to breaking down barriers.”

“Every employer thinks of how to advance his/her business and to this end seeks to hire the best and most outstanding. From my experience, excellence is not an easy feat – it involves perseverance, dedication and an ability to deal with failures. To succeed we also must know how to handle failure. In the future, when you are a success, remember how much support you received from the Technion and give back to the community.”

Sara Katzir, the Head of the Beatrice Weston Unit for the Advancement of Students at the Dean of Students Office said, “Today we are embarking on a new path, now that we have managed to narrow down the dropout rate. You are among the first in Israel to participate in this new program, and many eyes are fixed on you.”

In the photo: Professors Yosef Jabareen and Moshe Sidi, Technion’s Senior Executive Vice President, appearing before the outstanding students at the inauguration ceremony.