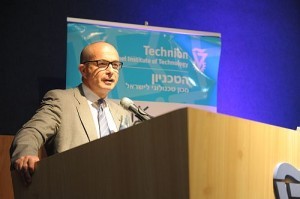 Technion leaders and heads of Israel’s pharmaceutical industry held a commemorative evening in memory of the late Abraham Barry Cohen, who served as Senior Vice President of Merck & Co. and from 1977 to 1988 as President of the Merck Sharp & Dohme International Division, and as a longstanding member of the Board of Directors of Teva and Technion’s AMIT Institute. He passed away a few months ago in New York.

The President of Technion, Professor Peretz Lavie, said that he appreciates that the ceremony was being given at Technion, since Barry Cohen played an important role in his AMIT Institute.

Moshe Arens, Former Israeli Defence Minister, praised the enormous contribution of Mr. Cohen to “Teva” and his foresight and business vision. He said that, “Teva was and remains an Israeli company not looking for an exit.”

Dr. Jeremy Levin, the President and CEO of Teva, said that Barry Cohen interviewed him when he first started working for the company. He said that it was not an easy interview, and that Barry asked him a lot of difficult questions. “He was especially interested in my knowledge of medicine, globalization, and my connection with Israel,” he said. “He again stressed the importance of innovation in helping patients around the world,” he added. “Good people have led Teva to what it is today, and Barry was one of them.”

Nobel Laureate in Chemistry, Professor Aaron Ciechanover from Technion’s Ruth and Bruce Rappaport Faculty of Medicine (both he and his brother were very close friends with Barry Cohen) lectured on “Personalized Medicine.”

The host of the evening: Mr Avi Kerbs, President and CEO of Teuza  .

Above: President and CEO of Teva, Dr. Jeremy Levin, speaking at the event. Photographed by: Moran Wiesman, Technion Spokesperson’s Office